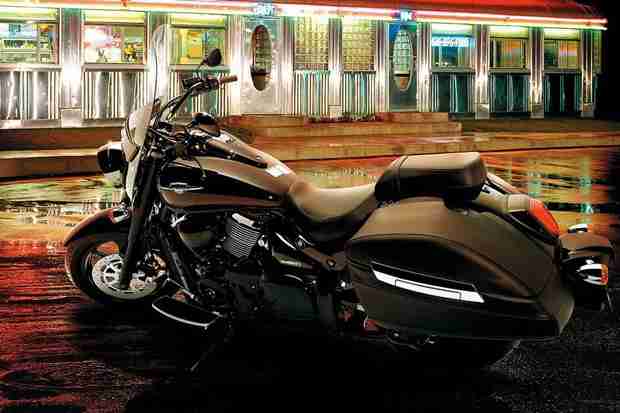 The Suzuki Intruder C1500T was one of those motorcycles that was silently presented at the Intermot. Although not totally new, this huge powerful tourer now gets a fuel injection system and an engine that is the most powerful in its class.

The new Suzuki Intruder now hosts a 1462cc engine with 4 valves per cylinder a twin spark system and liquid cooling. The pistons get a special coating that reduces friction and increases heat transfer. The Intruder gets a five speed automatic transmission with a slipper clutch and a special gear shift assist system called the SCAS that aids the automatic transmission for smoother gear shifts. Suzuki have retained a classic look for the 2013 Intruder, but at the same time there are touches like LED rear lights that add that bit of ‘current age’ to it. The side bags and windscreen come standard and the new speedometer shows all sorts of information including the current gear.