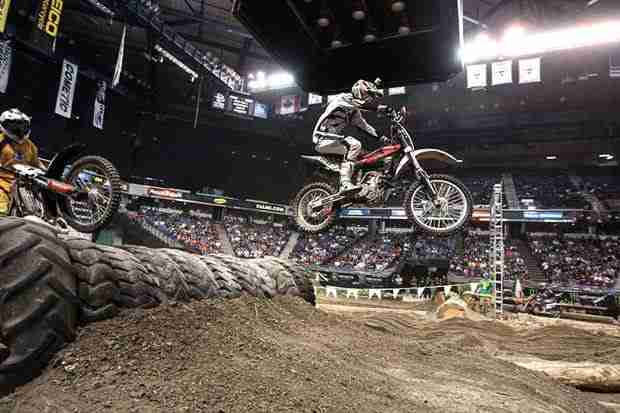 It’s time again for Summer X Games and the world’s best off-road motorcycle racers are ramping up for the Moto X Enduro X event. The action heats up Sunday, July 1st, when Husqvarna Motorcycles enters the STAPLES Center in downtown Los Angeles with a factory backed team featuring four of the top world-class extreme racers from four different countries, each hopeful of returning home with an X Games medal.

“It’s very exciting for Husqvarna to return to X Games with four such outstanding riders,” said HMNA Race Team Manager Derek Sorenson. “We had a presence at the 2011 X Games but unfortunately our EnduroCross star, Cory Graffunder, was out with injury. Cory will come out strong this Sunday along with three Husqvarna teammates who are totally capable of reaching the main event — and the podium.”

AMA EnduroCross first became a part of Summer X Games in 2011, and is going into its second year as a part of the world’s largest extreme sports competition. Last year over one million U.S. viewers tuned in to the ESPN telecast of the inaugural race and over 100 million viewers tuned in worldwide! Even the live audience saw record-breaking numbers, with nearly 14,000 fans watching the action unfold up close as the finale of X Games 17.

X Games 18 kicks off on June 28, and Moto X events will be taking place on the floor of the STAPLES Center Thursday, Friday and Saturday. On Saturday night, however, the dirt will undergo a major transformation as the most extreme elements of off-road terrain make their way indoors for a rare urban appearance. Boulders, logs, river rocks, earthmover tires and even a cement pond all blend together to form the Enduro X course literally overnight.

“It’s a race just to build the track,” EnduroCross inventor/producer Eric Perronard commented. “But we’re thrilled to be coming back to Los Angeles and X Games 18, and so excited to have such a strong list of pre-qualified riders from around the world racing with us. Bringing together the best competitors in the world is what X Games is all about; for sure we’re going to have another amazing show Sunday night.”