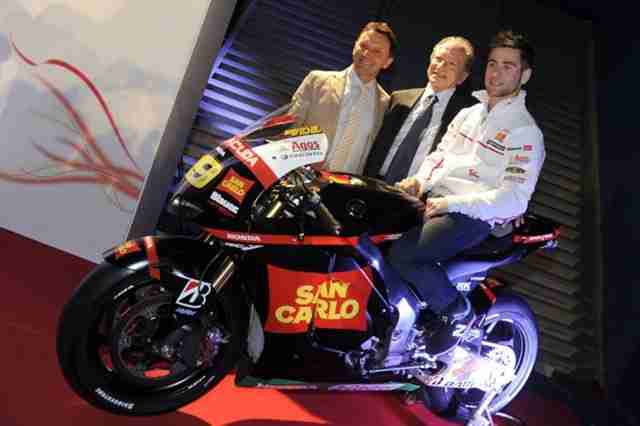 The San Carlo Honda Gresini team chose the Galleria del Vento (wind tunnel) at the headquarters of the Polytechnic University of Milan to host the presentation of the MotoGP, CRT and Moto3 projects for the 2012 season. The ambitious project has the motto “Technology and Passion” which summarizes the team’s philosophy for this new adventure. Fausto Gresini and Alberto Vitaloni commence the challenge with energy and enthusiasm and a vision to build a project based on the present and the future of motorcycling.

2012 sees the interests of the team diversified in many directions: Ãlvaro Bautista will race in MotoGP with the Honda RC213V, Michele Pirro will be responsible for the FTR with the Honda CBR1000 RR engine tuned by Ten Kate in the CRT category and NiccolÃ² Antonelli will be riding the NSF250R in Moto3. “Technology and Passion is the perfect combination and remains the driving force behind the project we are doing with the Gresini team. From here a new season begins and we are proud to continue a collaboration that has given us much excitement in recent years. We want to continue on behalf of Marco (Simoncelli), because I’m sure he would have wanted it that way. I hope the choice we made will bring us new successes,” said Alberto Vitaloni President of San Carlo.

Team owner and manager Fausto Gresini, who has had trouble adjusting to the tragic death of Simoncelli seemed enthusiastic about the start of the new season said, “It was a fantastic day, full of positivity. We are starting again with renewed enthusiasm, trying to combine the best “Technology and Passion”. Having a partnership with San Carlo is a great source of pride because the energy that President Alberto Vitaloni sends out is essential for everyone. We have a comprehensive program for 2012, participating on several fronts: in MotoGP with Alvaro Bautista and Michele Pirro (CRT), with Niccolo Antonelli in Moto3 and in Moto2 with Gino Rea and Ratthapark Wilairot. It was also very nice to meet with students at the Polytechnic University of Milan. I can say that we are starting on the right foot and feel confident for the season start in Qatar on April 8th.”

Ãlvaro Bautista, who spend his first two seasons in MotoGP with Suzuki before switching to Gresini and finished 7th in the Sepang II test said “I am very happy to be in Milan for the presentation of the San Carlo Honda Gresini team. It’s the start of a new adventure for me and I think we have all the elements to do well this season. I’m satisfied that the Sepang test were very positive and now we head to Jerez to finish the job and try to find an even better set up with the Honda RC213.”

Michele Pirro is the only CRT rider to have yet test his bike, but will be giving his FTR/Honda a shakedown test at Imola on Friday commented, “I’ve finally been able to touch my bike with my own hands! Is beautiful and I’m eager to try it. I’m convinced that the team did a good job and therefore I feel confident ahead of this new challenge. At first it won’t be easy, but I’ll work with my guys to get positive results. “

16-year old NiccolÃ² Antonelli after winning the 2011 125cc CIV title (on the day of Simoncelli’s death) will be debuting in Gresini’s new Moto3 squad and the team will be using the classic San Carlo white livery that they previously used in MotoGP.

“For me, everything is really new and it’s been exciting to experience the atmosphere at the presentation. Standing next to Michele and Alvaro, I could breathe in the smell of the championship and I’m charged for next season. I found a good set up that felt good with my Moto3 and soon at the Jerez test I’ll try to improve it even more, ” said the Italian youngster. Fausto Gresini said that they decided to go with a black livery for Bautista and Pirro’s bikes to mark their need to change and as sign of respect towards the late Marco Simoncelli and that black is an aggressive racing color. 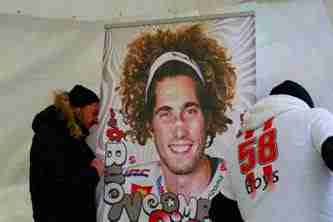 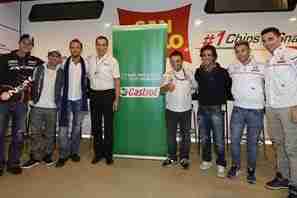 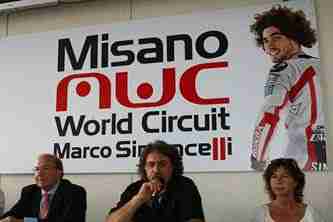 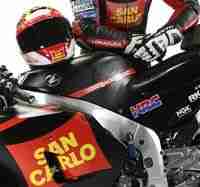 SAG Group and San Carlo Honda Gresini team up for 2012