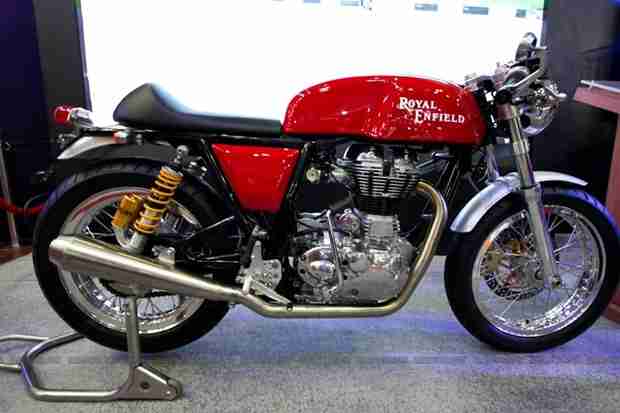 The Royal Enfield Cafe Racer was displayed at the Long Beach Motorcycle Show that took place between December 7-9, of this year. This retro looking motorcycle was first displayed to the world at the 2012 Delhi Auto Expo and at that point of time even Royal Enfield were unsure of the plans to make it a production version. But the amount of attention that this motorcycle has generated across the world has made the decision easy for Royal Enfield and the company has confirmed that the Cafe Racer would be a 2014 model with an announcement in mid 2013.

There are of-course some changes in the production version from the concept you see here in the photographs. The Ohlins suspension at the rear will be replaced with a more cost efficient one from Paoli and adjustable rear seats are added. The engine on the Royal Enfield Cafe Racer would be powered by a single cylinder 535cc Unit Construction Engine (UCE). Although the existing 500cc engine on other Royal Enfield models put out a rather low peak power, the Cafe Racer engine with its slightly higher capacity is expected to have a engine tuned for better power in the range of 34BHP. Key features apart from the obvious Cafe Racer design include Brembo brakes, clip on bars, dual instrumentation, bar end mirrors, rear sets, 7â€³ factory headlamp and a tuned race pipe.