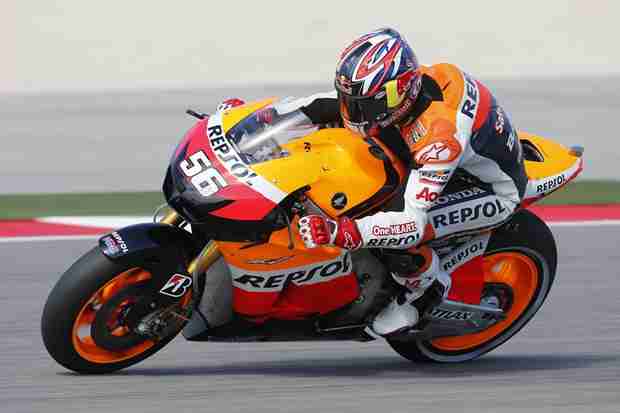 The MotorLand Aragon circuit will host a Grand Prix event for the third time in its history this weekend. With the absence through injury of the winner on both of the previous two years, Casey Stoner, Repsol Honda Team colleague Dani Pedrosa will try to take to the top step of the podium in MotoGP. Marc MÃ¡rquez, runaway leader of the intermediate category, looks to continue his run of three consecutive victories –and repeat last year’s victory at the track. The Moto3 squadron of Maverick ViÃ±ales, Ãlex Rins and Miguel Oliveira will seek to return to the podium in the third Spanish race of the year, whilst Ãlex MÃ¡rquez will again try to finish in the points.

The MotoGP World Championship has had only one winner at Aragon: Casey Stoner, undefeated in the 2010 and 2011 races. The absence of injured Repsol Honda Team rider leaves teammate Dani Pedrosa as the favourite to take over his reign. The Repsol rider, second for the past two years and the victor of two consecutive races before being taken out at Misano two weeks ago, is in excellent form.

Sharing the garage with number 26 will be Jonathan Rea, contesting his second MotoGP race. The Superbike rider will once again be onboard Stoner’s bike this weekend and looking to improve further on his strong eighth place debut in the World Championship two weeks ago.

After a stunning final lap in the Misano race, Marc MÃ¡rquez is positioned at the head of the Moto2 standings with a record advantage this season. He is 53 points ahead of second placed rider Pol EspargarÃ³. The Repsol rider has challenged himself to score his fourth consecutive win this weekend, which would be his 25th victory since joining the World Championship. If he can achieve it, then MÃ¡rquez would have exceeded his overall total from 2011 –with four races to go in the current campaign.

Maverick ViÃ±ales wants to regain a spot on the podium in front of the Spanish fans. The Spanish rider knows what is required, having placed on the rostrum last season, and still wants to push series leader Sandro Cortese all the way. Ãlex Rins makes a first visit in the World Championship to a circuit that he knows perfectly and at which he intends to continue his magnificent rookie year, in which he lies fifth in the overall standings. Teammate Miguel Oliveira is ninth and will try to finish an AragÃ³n GP for the first time. Ãlex MÃ¡rquez has recent experience of the track from a second position in the Spanish Championship a few months ago, as he debuts there in Grand Prix racing.

“Aragon is a very good race and the circuit is impressive. We went there with the team for a two day test at the beginning of this month and we did a good job. Personally, I’m looking forward to seeing the Spanish crowd again, it would be great to see the circuit full of people like we had in the previous years. The bike is working well and I’m feeling good; we go there with the same determination as always and motivated to continue riding well and have another good race.”

“I am now in week four of my five back-to-back races including both SBK and MotoGP but I am still really excited about this coming race. Having tested in Aragon on the RC213V a couple of weeks ago I am feeling more confident coming to this race than I was in Misano. Hopefully I will be able to pick up where I left off after the test as I was really starting to bond with the bike. Aragon has a really long straight which suits the power of the Honda and I am really looking forward to working with the Repsol Honda guys again and building on the experience I have gained to date.”

“MotorLand Aragon is a track which went rather well for me last year and at which I felt very comfortable. Let’s hope that it is the same this time. We’ll try to keep calm and have a good weekend in front of the fans. This track has a very technical first section, but the final sector is also very tricky. It is a circuit where you need to be good at cornering. The circuit is very close to Lleida, so I am sure that my friends, family and supporters will be coming along and that I will give my all to get the best result possible.”

“The championship has become an uphill struggle and we aren’t just depending on ourselves now –we need to hope for a mistake from the leader. I am going to attack at the AragÃ³n GP for that reason. Strategic riding is useless now. I want to win as many races as possible, force Cortese to the limit and finish the season in the best way possible.

I like the MotorLand track a lot, although it has a very long straight for which you need a good engine. I hope to have one this weekend and get back to the top step of the podium. Riding at home again motivates me a lot, and I’m sure that the fans will push me to take a great result.”

“This is a very interesting circuit. It is fast with long straights and a climb that is very tricky. It is fun to ride and I like it, although last year I was unable to finish the race. This weekend I hope to have a pleasing result, which we will be working for ahead of the contest. The track requires good cornering technique and opening the throttle very early if you want to put in good times. The engine is very important on the climb.”

“I am very excited about this Grand Prix, because a lot of people will be there for me. The town where my family live is near the circuit, so I hope to do as well as possible for them. It is a track that I like and I am motivated after taking fourth at Misano. MotorLand Aragon is a track with few slow corners and a high difficulty level. It was hard for me to feel comfortable the first time I rode there, but as time has gone on I have become more familiar with it and now I like it.”

“We come to the Aragon GP with energy and desire to do well. I like the track and we can go fast there, although we shouldn’t forget to take things step-by-step and work methodically with the team. If we carry on working in the same way, then I think that we can have a good race.”