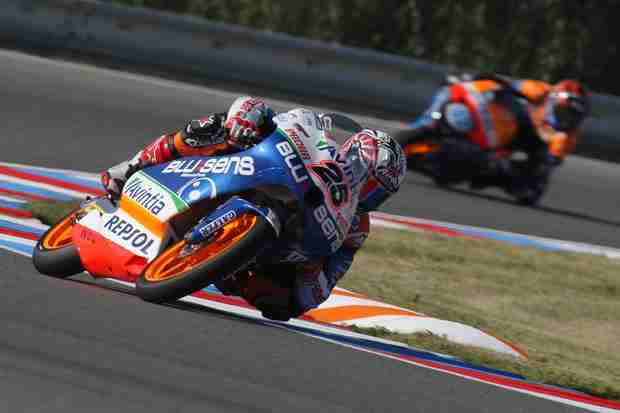 The first day of free practice for the Czech Republic Grand Prix started positively for Maverick ViÃ±ales. The Spaniard took the best Moto3 time of the day, whilst his fellow Repsol riders experienced mixed fortunes. On his first encounter with Brno, Ãlex MÃ¡rquez improved steadily –finishing in twelfth place. Further cause for optimism came from Miguel Oliveira, who finished with the tenth fastest time, contrasting with the fortunes of Ãlex Rins. Despite a good start in the second session, his progress was halted after a small crash which left him low down the order.

In the first free practice, as happened at Indianapolis, the Repsol riders were out amongst the fastest riders in the class. is again among the fastest in the category. The first encounter with the beautiful Czech track ended with Miguel Oliveira in second place, followed closely by Maverick ViÃ±ales with the fourth fastest time. Ãlex Rins was sixth quickest. Both he and Ãlex MÃ¡rquez (sixteenth) debut at Brno this weekend.

Continuing with the job of setting up the bike and focusing on the chassis and tyre choice, ViÃ±ales took another step forward in the second session, improving by almost a second and a half to clinch the best time of the day. Not in such an advanced position but chipping away at his times was Miguel Oliveira. The Portuguese took tenth place, two ahead of Ãlex MÃ¡rquez. The Repsol rider completed 14 laps in the second session at the difficult track, stopping the clock at just over a second slower than ViÃ±ales.

In contrast, Ãlex Rins was unable to carry over his excellent start from the first session into the afternoon. The Repsol rider was flung from his Moto3 bike when accelerating at Turn 9, 15 minutes before the end of the run. Neither he, nor his Suter Honda, suffered serious damage in the crash. He returned to the track with 5 minutes to go, improving his best time from the afternoon but failing to go quicker than his morning lap, placing him seventeenth overall today.

“It was a good way to start the weekend. Getting back to first position again is very positive, especially as the day was a bit tricky because of the wind. I am happy because I am finding my own pace and the tyres have been very working very well. We are working hard on the chassis and forgetting about the fact that we lack a little speed.”

“Despite the result, the second session today was more productive than the first. We were able to get a good time riding alone and over a series of laps. We can still improve our pace a lot, just like we also need to configure the setting a little, because I don’t feel entirely comfortable. In these circuits which are longer and with fast, linked corners, we find picking a setting a little harder, but I am not too worried as I believe completely in my team.”

“This morning we started well, as we’ve adapted quite quickly to the track. We got sixth place at the end of the first session. In the afternoon we struggled a bit to find our pace. After changing tyres, on the first lap I leant over and crashed when accelerating. The mechanics worked quickly and were able to fix the bike so that I could get back out again, so at least I could do two more laps. Despite the crash, it has been a positive day for us. I like the circuit, it is fast and I think that we can do well here.”

“I’m quite happy. It’s been a positive day. In the morning I struggled a bit to get comfortable with the bike and with the circuit, because today was the first time we had ever ridden at Brno. In the afternoon we made some changes to the setting from the first free practice and I think that in the end this worked.

I felt much better, so ahead of tomorrow’s practice we hope that we can improve the performance from today. We still have to improve some technical aspects, but we shall see what happens on day two. I like this circuit, especially the third sector, and there is no place that was any more difficult than usual.”