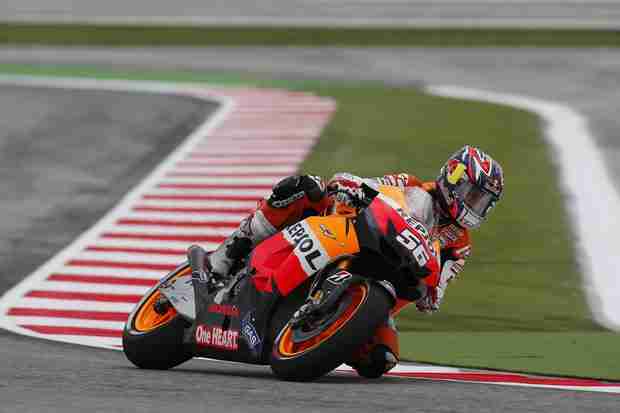 In a slow return to action for day one at the San Marino Grand Prix, the two title candidates in the MotoGP class –Dani Pedrosa and Jorge Lorenzo– did not complete a single lap of the Misano circuit. Intermittent rain left the track in a precarious state, and debutant Jonathan Rea limited his track time to seven laps.

With cold, rain and sporadic rain hitting the track since yesterday, the opening day of round thirteen in the MotoGP World Championship provided circumstances occasionally seen this season, as only seven riders decided to put in laps. Neither Dani Pedrosa –winner of the last two Grands Prix– nor debuting rider Jonathan Rea went out in the morning session due to damp conditions that were not sufficiently adaptable for either slicks or wet weather tyres. 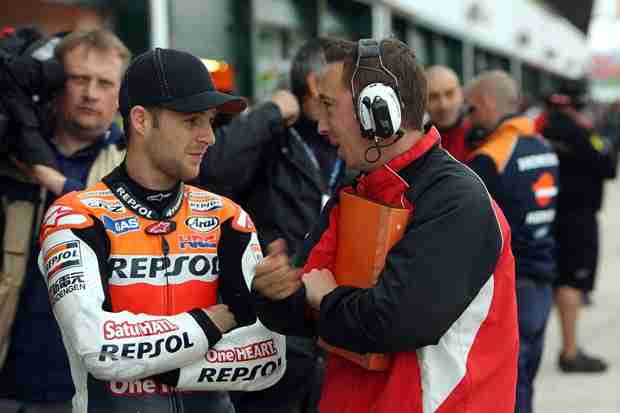 There was an almost identical situation in the afternoon outing, in which eight riders were in action –including the British who steps in for the injured Casey Stoner. Rea, using the number 56 on his Repsol Honda Team bike, he performed seven laps. Dani Pedrosa once again remained in his garage. With the weather forecasts more positive for tomorrow, the wait to see the on-track duel between Dani Pedrosa and Jorge Lorenzo will end then. There is still one practice session and a qualifying run to go, in which to prepare for Sunday’s race.

“On days like this it’s almost impossible to get any feedback on the bike. Actually, we saw in both sessions that the weather was changing so quickly that the riders going out with slick tyres had to come back in because it started raining or the other way around: going out with wets and destroying them in just a few laps as it was drying up again. The weather forecast looks better for tomorrow and Sunday, so let’s hope we can take advantage of tomorrow morning’s session to find a good setting and have a good qualifying”.

“It was a frustrating day with these weather conditions. This morning the track was slightly wet and began to dry up towards the end of the session, but then it began to rain again, so we didn’t make it out at all. Then in second free practice I went out straight away with the slick tyre to try and get some kind of feeling and I only managed a few laps as the tyre wasn’t getting up to temperature.

It was a pretty pointless exercise and I didn’t have any real feedback to give to the engineers. It’s a strange situation when the temperature is so low that none of the top riders even go out on track. We need to cross our fingers for some sunshine tomorrow so I can find a good rhythm on the bike and gain some confidence in the tyres in time for qualifying”.