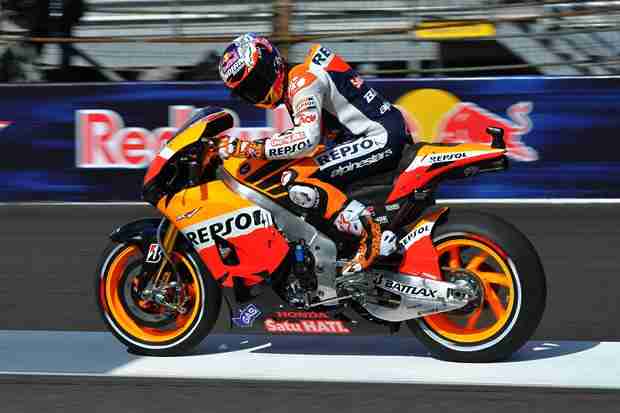 The Indianapolis Grand Prix concluded just a few days ago, but the World Championship keeps its momentum going with a long trip to Europe for the Czech Republic Grand Prix. For the Repsol riders, there is the added motivation of Pedrosa and Marquez’s wins Stateside and good performances from a heroic Casey Stoner in MotoGP, plus Ãlex Rins and Miguel Oliveira in Moto3. Despite crashes, even the showings of Maverick ViÃ±ales and Alex Marquez were outstanding, and this Sunday they will have another chance to finish the job –this time with a more positive outcome.

Race after race, Dani Pedrosa continues to show his credentials for the MotoGP title in what is currently his best season since joining the premier class. Making consistency the big string to his bow, victory at Indianapolis also added important points to his championship tally. It was his 40th GP win and came in dominant fashion. The Repsol rider took pole at Brno last year and has been victorious there in 125cc and 250cc, although the closest that he has got to a MotoGP triumph was last year before he crashed out of the race.

The victory that time went to Casey Stoner, who this past Sunday had a courageous ride to overcome injuries sustained in a qualifying crash. With an injection to reduce swelling and a specially adapted boot, the Australian managed to finish a praiseworthy fourth. The reigning World Champion has renewed optimism ahead of the race at Brno.

Marc MÃ¡rquez arrives at Brno as the runaway leader in Moto2, fresh from claiming his fifth win from ten races. His most recent victory –his 22nd– moves the Repsol rider ahead of future teammate Dani Pedrosa as the Under-20 with most wins. MÃ¡rquez was on the podium at Brno last year. Maverick ViÃ±ales will be equally motivated, looking to make amends for the end result at Indianapolis. He crashed out of the fight for victory with just two corners to go at The Brickyard. He lies second in the overall standings. More positive was the performance of Miguel Oliveira who, alongside Ãlex Rins, made a positive return to racing after the holidays. With them at Brno will be Ãlex MÃ¡rquez, who like Rins will go to a another new track to further his GP experience.

“Brno is a wide and very fast track, with high speed corners where it is important to have good grip and front end feeling. Honda has been strong in the past few years there, so we hope to have a good performance in this race also. I’m looking forward to the race in Brno and to fight again for the victory. The setup of the bike and electronics can be key, as well as the weather which is always a little changeable in the Czech Republic. We need to keep focused and strong and with options for the victory every weekend”.

“I’m not feeling too optimistic for Brno after a tough weekend in Indy. The crash in qualifying last week has left me with a serious problem in my ankle and we were fortunate that Indy was a left hand circuit, so a lot of the weight was off it but we still had changes of direction which hurt a lot. In Brno there are many changes in direction and a lot of right hand corners so there will be a lot of weight on my ankle and it’s going to be very difficult. It’s a shame as Brno is a circuit that I usually enjoy due to it’s fast and flowing nature, so I’ll be resting as much as possible this week and wait to see how we feel when we get on track on Friday”.

“The Czech Republic Grand Prix comes straight after the triumph in Indianapolis, so we’re happy and in good shape. But we have to be focused from the start, much like we were last weekend. The Brno circuit is very fast and very good for rivals like Iannone. Last year we placed second and the aim must be to be on the podium this year, to continue adding as many points as possible to my tally in the fight for the championship. Suter and the team worked very well at Indy and at the test in Portimao, but now we have to keep it going”.

“The result at Indianapolis was certainly not good, but we must continue to work as usual, thinking positive. There is still a long way to go in the championship and we’ll give everything that we have. The Brno circuit is not particularly suited to my riding style, but I don’t dislike it. It’s a nice track, with steep slopes and a very technical downhill area. The finish line comes after a sharp climb in which you need a good engine, so we have to be vigilant about that. It is sure to be a tough race, but I am convinced that we will be in the fight for the podium”.

“I’m going straight to Brno without going home, as there are two races in a row, the best way to return from a break. It’s a circuit I like very much, which I rode at for the first time last year and the truth is that I had a good feeling there. It’s smooth and fast, so I hope to be able to work hard, right from the start. We have recovered much confidence after the fourth place at Indy –it seems that the holiday was good for us”.

“I’m looking forward to learning this circuit. I’ve never ridden at Brno, but it looks very spectacular. I was left wanting in my quest to get a good result at Indianapolis. The race start was perfect, but then we lacked a little something to be part of the lead group. Going directly to the Czech Republic is something that I hope will lead to improvements. The team and I are focused on taking another step forward”.

“Racing in Brno after what happened on Sunday is very positive –we can put things behind us as soon as possible. At Indy I felt good on my debut with the team, but I did not cap that off with a good qualifying session. Now we go to another unfamiliar track and the main goal will be to keep gaining experience for the future”.