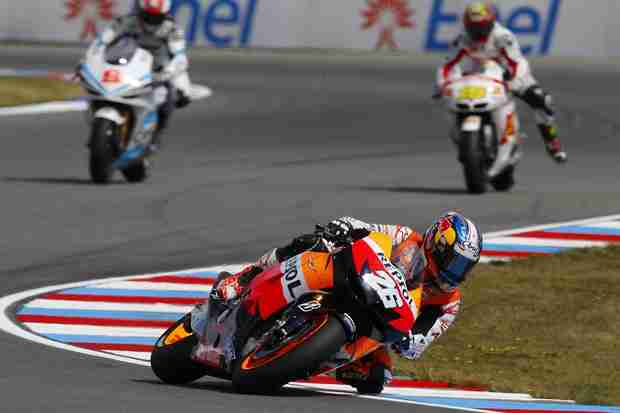 The home straight of the 2012 World Championship is upon us. The San Marino and Rimini Riviera GP is the latest round of the series and takes place this weekend at Misano. With all still to play for, the Repsol riders have clear chances of winning the title in the three categories: Dani Pedrosa is chasing his third consecutive GP win and looking to cut the gap to leader Jorge Lorenzo. Marc MÃ¡rquez is attempting to increase his advantage at the top in Moto2 and Maverick ViÃ±ales will continue his fight for first place in Moto3.

On a run of two consecutive race victories and eight GPs on the podium (level with his own personal record), Dani Pedrosa lands at Misano in one of the best runs of form in his career. Just 13 points separate him from his objective of the World Championship lead. The Repsol Honda Team rider has three podiums at this circuit from the past three races, including a win in 2010.

Pedrosa will be joined by a new teammate for this race. World Superbikes rider Jonathan Rea comes in for the injured Casey Stoner and will debut in MotoGP onboard the Repsol Honda RC213V. He has already tried out the bike at the recent Brno and AragÃ³n tests.

In Moto2, an advantage of 48 points for Marc MÃ¡rquez is not enough for the Repsol rider. He has more points now than in his 125cc title-winning 2010 campaign, but he still wants to extend his advantage in the standings. At Misano, the Spaniard has been on the top step of the podium for the past two years.

Despite the results at Indianapolis and Brno, Maverick ViÃ±ales is not giving up on the Moto3 title. He is currently in second place and has the most wins in the class: 5. He rode for the first time at the 4.226km Misano circuit last year, albeit suffering from a fever, and claimed seventh place. In that race, Miguel Oliveira placed tenth. Ãlex Rins and Ãlex MÃ¡rquez debut at Misano in the World Championship, although the former took two podiums there in the Italian Championship at the end of July. Rins is currently second in the Rookie Of The Year standings.

“Misano is a tricky track, quite bumpy, with a lot of braking and accelerations. The grip level is always a challenge, because it changes a lot from the morning sessions to the afternoon. In the past, our bike has been quite unstable there but I believe this year we have improved that. I hope the work we have done in the Brno and Aragon tests with suspension and electronics, can help us to start the weekend strong in Misano. We need to continue working in the same way, focusing on our bike’s performance and my riding to keep reducing the gap in the Championship”.

“For me its a big dream come true just to race in MotoGP; it’s been very unfortunate for Casey to sustain such an injury when he was having a very strong season and my best wishes go to him while he recovers. Now, my job is to replace him and I will try to do the best I can. I love Misano, I’ve already raced there this year and I finished second, it’s also where I had my first ever Superbike win in 2009 and I enjoy the circuit and the Italian fans, they are always very enthusiastic.

I take this opportunity like a great gift from Honda; in the few days I’ve spent with the team I have felt very good, they understand it will take me some time to push with this bike but I’m learning every time I get on it. It’s been great to have these 3 days testing on the bike to prepare myself and for sure Friday morning will be less chaotic. We already have the riding position set, the base setup is set and I understand the electronics a little more. I know it’s going to be busy, but I’m ready”.

“Misano is rather different to Brno. It is a track with a lot more braking and is generally slower and smaller. I have a fond memory of last year’s race, at which I took an important victory. Once again, the aim is to start to work like always, focused on Sunday. The Italian riders will be taking on this race with extra motivation that has always made them go fast. We will have to be calm and see where we can finish.”

“We rested up for a few days after Brno, which did us good. Now we get to the final part of the championship, where it will all be decided. The first meeting is the San Marino GP and I am going to give my all to make up ground. I can’t deny that this is not the strongest position that I have been in during this season, but the year isn’t over yet. I like Misano and I think that we can do a good job there; I just hope that the weather is good, so that we can work on our setup. I also hope not to have a fever, as I did last season. I am sure that it will go well and that we will be fighting to the end.”

“I feel fairly comfortable riding at this track. I have some good memories of last year’s race, where I rode pretty fast. It is an ideal track for having fun on the bike and making use of the strong braking points that suit my riding style. We will look to find a setting that puts us where we belong, and we will try to enjoy the circuit and the bike.”

“I am very excited about Misano. I took part in an Italian Championship round there two months ago and it went well for me, so I am sure that with a World Championship level bike I can take my times forward a notch. I don’t mind the track at all. The first part is very slow and the faster second part I like a lot more.”

“We are heading to Misano, which is a new track for me to ride. I’ve been there in previous years supporting my brother, but I’ve never ridden the track. Like at the majority of Grands Prix, with the exception of the Spanish rounds, we will be starting from zero with the aim of working hard as a team to place as high as possible. This circuit is very varied, with a slow first part and a third sector that features three fast corners. I won’t know if it is well suited to my riding style until the first practice, but we will be at 100% when we get there, looking to do a good job.”