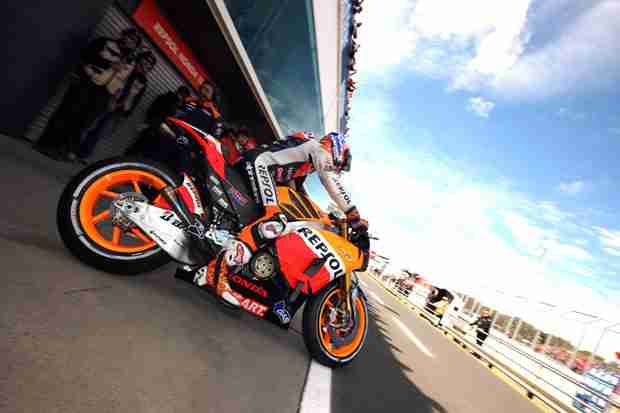 After two races finding his rhythm after an ankle injury, Casey Stoner started the Grand Prix of Australia in fine form, showing a much higher pace than the rest of the competition, which he left more than 8 tenths of a second back. Behind the reigning World Champion, Dani Pedrosa was the next fastest, with Jorge Lorenzo third.

If anyone doubted Casey Stoner’s condition after an injury and two back-to-back races, the Repsol Honda Team rider rapidly proved them wrong. From his 16 laps in the first session he stopped the clock at 1’30.374, over 9 tenths quicker than second placed Jorge Lorenzo. Dani Pedrosa was third after 18 laps and a time of 1’31.533.

More motivated than ever on his last visit to his home track, where he had a corner named after him yesterday and where he has won for the last five consecutive years, Stoner once again set the standard in the second session. The Repsol Honda Team rider was the only one to break the 1’30 barrier, stopping the clock at 1’29.999. 0.885 back was teammate Dani Pedrosa, who was second –0.121 ahead of Jorge Lorenzo.

“Fortunately, today we’ve had two dry sessions which was not expected and that’s good at a circuit like this as the first day is important to find a good direction for the set up. I only tried the soft rear tyre today, so tomorrow will be important to test the hard compound and some different ideas on the electronics and suspension to improve the feeling. Casey is going very fast here, as expected, so let’s see if it stays dry tomorrow and we can work on the pace and close the gap to Casey”.

“It was a very positive first day, we were pretty quick to get on the pace and to be honest I didn’t expect to achieve the lap times we did. With the extra horse power we have this year it’s a little easier to get around this place quickly!. The times we were able to do in the first session were pretty good but I thought everybody would improve a lot more in the second session but we were able to go quite a lot faster than everybody with almost race distance on our soft tyres and then we put the hard tyre on and were able to improve again.

This is very positive at this stage of the weekend but we’ll have to wait for tomorrow and Sunday to see where everyone else is. My ankle is in a lot worse condition than in Motegi but coming here, there are a lot less right hand corners, it’s nice to take a bit of weight off it”.