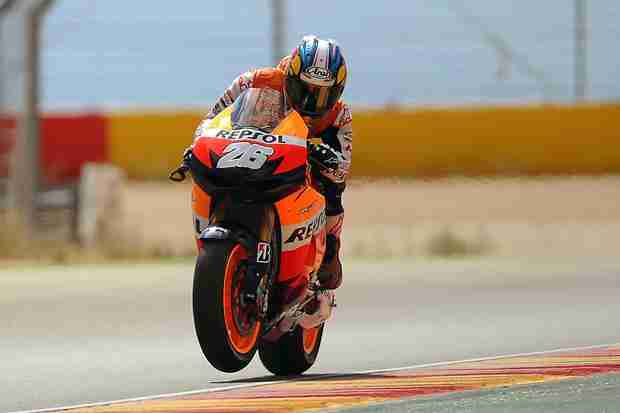 The Repsol Honda Team completed another busy day of testing at Motorland Aragon today. Dani Pedrosa covered 238,6 kilometres, 47 laps, with a best lap time of 1’48.499. Jonathan Rea did 314,8 kilometres –a total of 62 laps and recorded a fastest lap of 1’50.057. Today Pedrosa, who set the fastest time of the test with 1’47.983 yesterday, tried a new exhaust looking to improve the power delivery of the engine on his RC213V and he also tested a modified rear shock to increase grip.

Rea, who will head to Germany tonight for the WSBK Championship this weekend in Nurburgring, took another step on the MotoGP machine working to improve his feeling with the RC213V and the Bridgestone tires.

The Repsol Honda Team hope to take advantage of the results from this test for the last 6 last races of the 2012 MotoGP World Championship. Pedrosa will arrive in Misano next week in good form and second in the Championship, 13 points off the leader, and Rea will make his debut with the Repsol Honda Team on a race weekend replacing the injured Casey Stoner.

“Today I tested a new exhaust, just to see if we can get a better drivability from the engine and we found some positives that can help us in the next races. We also tried a different rear shock to get more grip. In general it’s been a positive test, so I’m happy about the work we did and now we are focusing on the next races, where we will try to maintain the same level. We were not looking for a lap time here, but on working on improving the bike. It’s been good to be back testing after the last two good races in Indy and Brno and now it’s time to recover some energy to go to Misano and push again to the maximum”.

“I’m happy with the test we did here in Aragon. Now we’re not looking at the lap times so much, but the gap to the front which is decreasing every test, so I’m happy with that. Yesterday we did a lot of work with the base setting and we confirmed that this morning. I’m still not completely happy finishing the corner, but this afternoon I did a long run and my fastest lap came at the end, so I need to push these tyres much harder and it’s a question of trust.

It’s been a good opportunity to test before the race; the Repsol Honda Team gave me the best opportunity, knowing the bike and the circuit and I am constantly learning. Now I’m going to Germany to race in Superbikes this weekend, so it will be a busy period for me but I will try to take advantage of it and enjoy it as much as I can”.