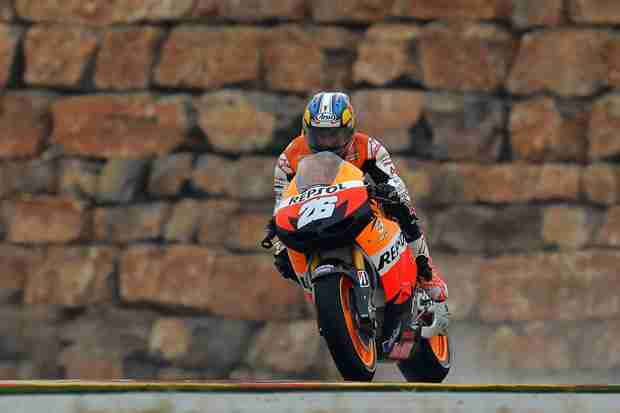 Dani Pedrosa and Jorge Lorenzo, or Jorge Lorenzo and Dani Pedrosa. That’s been the theme over the past few races between the MotoGP title candidates. Whether it be on a wet track, like this morning, or in the dry as it was in the afternoon for qualifying, the fight for the top spot is a persistent duel between the two Spaniards. In the end, pole went to the Yamaha rider, with Pedrosa second on the grid. Pedrosa crashed in the opening minutes of the session, participating in the rest of the run with his second bike and recording a best lap just 88 thousandths of a second off that of his rival.

Despite the bad weather and wet track, Dani Pedrosa went quickest in the third and final free practice session for the AragÃ³n GP. The Repsol rider completed 17 laps and stopped the clock at 2’00.490. His Repsol Honda Team colleague, Jonathan Rea, was ninth with what had been at that time his best lap of the weekend.

In qualifying conditions improved, the MotoGP riders going out for their first dry laps of the meeting. However, in the early moments of the session Dani Pedrosa suffered a crash on turn 14 after losing front grip. He escaped unhurt, although his RC213V needed plenty of work and Pedrosa thus went back out on his second bike for the remaining 40 minutes.

He didn’t take long in taking a front row spot, finally completing the session just 88 thousandths of a second behind compatriot Jorge Lorenzo. Jonathan Rea continued his MotoGP adaptation process with his second qualifying session in the World Championship, improving upon his grid position from Misano. He will take off from seventh, having clocked a time just a second off poleman Lorenzo.

“It’s a very good result for us after all the issues we had! I’m really happy to be on the front row and so close to the pole position. After the crash I had at the beginning of the session –I guess due to cold tyres because I was not pushing at all –we only had one bike left with 50 minutes remaining. I lost some time there and when I went out with the second bike I realised that I had to remain calm because it was the only bike I had for the rest of qualifying and also the only front tyre.

At the beginning, I was cautious trying to set a decent lap time and towards the end I just forgot about everything and pushed harder for the front row. We have a good position for the start, I just hope everything goes smoothly and we can have a great race tomorrow in front of the home Spanish crowd”.

“It was the first dry session of the weekend, I’m not sure what I’ve done to deserve this weather! Towards the end of the session we started to get going and find our rhythm, the lap time was ok and I see a few areas where I can improve, but we are closing the gap, now just a second from the pole time which I’m pleased with. In general I’m really happy with the bike and with the set up so hopefully tomorrow I can be closer to the front guys than I was in Misano. It looks like my last ride so I want to go out tomorrow and make every single lap count”.