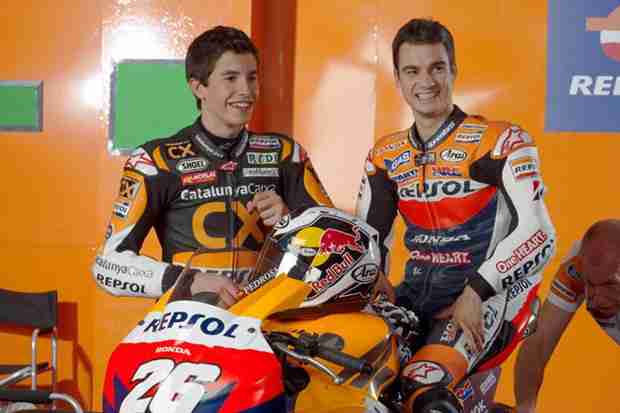 Honda Racing Corporation (HRC) have officially announced this morning a key part of their plans for 2013 and 2014. Riders Dani Pedrosa and Marc MÃ¡rquez will join forces in the Repsol Honda Team as of next season. The present and future of MotoGP will be combined in a ‘dream team’ lineup, bringing together Pedrosa’s premier class experience and MÃ¡rquez’ youth and potential. MÃ¡rquez moves up to MotoGP from Moto2 for 2013.

Both riders have achieved tremendous success since debuting in the World Championship with the backing of Repsol. Dani Pedrosa contested his first 125cc season at the age of fifteen and has eleven seasons under his belt representing the energy company. Marc MÃ¡rquez debuted in 2008, also aged fifteen, and has spent five fruitful years as a Repsol rider on the world stage.