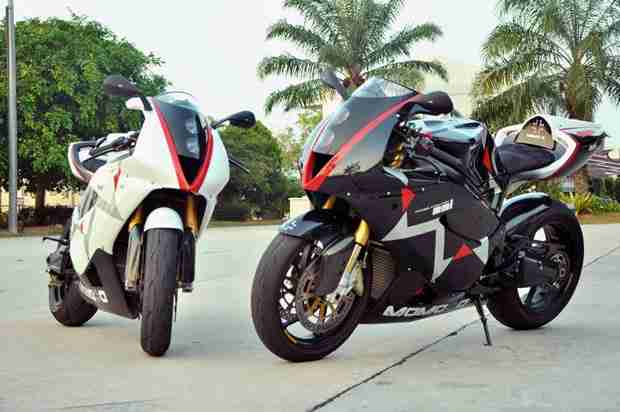 The Petronas FP1 was a bike developed by Sauber Petronas Engineering and of-course the oil giant Petronas. It was targeted to reach the MotoGP and was on-course with decent performances in the WSBK series but due to regulation changes had to quit from the championship. Due to its WSBK connection, 150 of these bikes were made, but none of them ever made it on road, and after Petronas lifted the money coming into the project in 2006 the bikes remained there forgotten.

After almost a decade since it first made news these motorcycles are all set for round two with a new name and slight design changes. The Petronas FP1 is now re-badged to Momoto MM1 and is now targeted at collectors. As a reminder, the FP1 had a unique inline triple engine, with a reverse-rotating crankshaft and a reversed cylinder head — intakes at the front, exhausts at the rear. The engine’s origins lay in the shelved Suter-Petronas MotoGP project of 2002, while rest of the bike was developed in the UK by MSX International. Production was intended to be done by Malaysian firm Modenas, although many, if not all, the 150 homologation bikes were actually made by MSX in Basildon, Essex (where some are believed to remain, under lock and key, to this day).