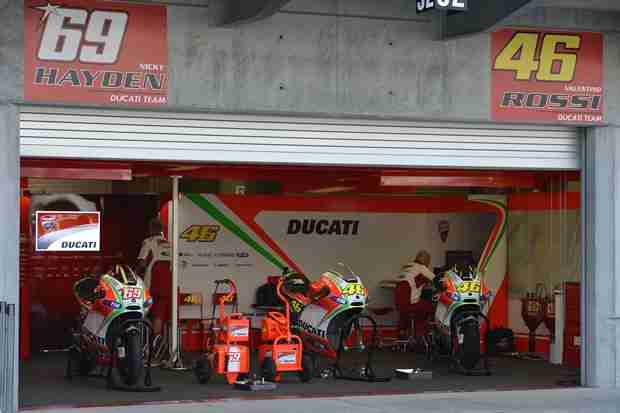 The Ducati Team will take to the track at Brno with Valentino Rossi only, as Nicky Hayden, who injured his right hand in a qualifying crash at the Indianapolis GP, is staying in the United States to recover. The American, who is expected to return at Misano, will not be replaced in the Czech Republic. The circuit, which was built in the mid-’80s, features a large variety of corner types and elevation changes. It is fast, flowing, and very wide. Rossi has collected four podium finishes there in addition to his seven wins across all classes.

“Laguna and Indy were two very difficult races, so I’m happy that we race again in just a few days, at Brno. The next two weeks will be very important for the rest of the season. I expect to do better in the Czech Republic, as it’s a track that I like and that is more ‘normal.’ I had a pretty good dry race there last year with Ducati, also in terms of the gap to the front. Then next week we’ll have two days of testing at Misano, where we’ll have some new things to try that I hope will help us to be faster in the last part of the season.”

“It’s tough to miss another race. I don’t have big problems, but my hand is still very swollen and I don’t have much strength, and of course right-hand injuries are worse for motorcycle racers. I would have been at far less than 100 per cent, and if I used too much force or crashed again, I could displace the breaks and possibly be in big trouble. Obviously, the head is even more important, and with the amount of time I was unconscious, I’m still dealing with a headache. The main thing is all the doctors told me racing was a really bad idea and not smart, and everybody on my team agreed. As much as the racer in me doesn’t like staying at home and missing track time and points, I need to listen to the experts and try to heal up and get ready for Misano. That’s an important race for me and for Ducati, and I’ll be doing all the rehab to come back as fit as possible. I don’t like it, but it’s the right thing to do.”

“Following the last checks that Nicky underwent to his hand, we agreed together that the best solution was to skip this race as well. I know that’s very difficult for him, but it was also the advice of all the doctors that he saw. He’ll try again in the coming races. We won’t replace him in the Czech Republic, and we expect him to return for Misano. With Valentino we’ll work to recover after two very challenging races. He likes Brno, he has won many races there, and last year he had a decent race.”