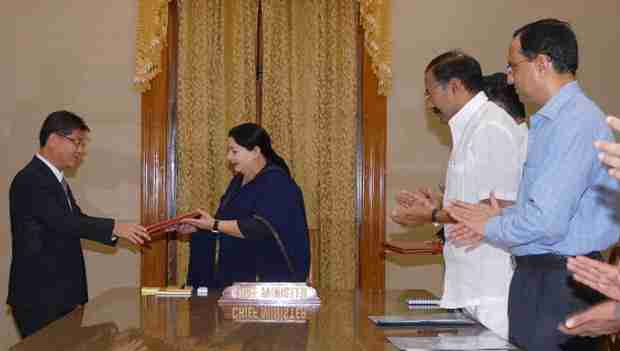 India Yamaha Motor Pvt. Ltd. signed a Memorandum of Understanding with the government of Tamil Nadu today approving the construction and operation of a new two-wheeler factory in the state. The new facility will join the currently operating factories of India Yamaha Motor Pvt. Ltd. (IYM) at Surajpur (UP) and Faridabad (Haryana) to meet the rising demand for two-wheelers in India.

The new factory is to be constructed on a lot of approx. 440,000 m2 in an industrial park in Vallam Vadagal on the outskirts of the city of Chennai, Tamil Nadu. Plans call for the construction of a factory facility with a total floor space of approx. 114,000 m2 and is scheduled to begin in September 2012, with completion and start of operations scheduled for January 2014. According to plans, the new factory will employ 1,800 people and have an annual two-wheeler production rate of 400,000 units at the start of operations. Production capacity will then be increased in stages to a level of 1.8 million units annually by 2018, at which time employment is expected to reach 6,500 people.

The forecast for the total investment in the new factory and facilities is approx. Rupees 1,500 Crores over the next five years. Commenting on the occasion, Mr. Hiroyuki Suzuki, CEO & Managing Director, India Yamaha Motor said, “We are very pleased with this development as this is in line with YMC’s medium-term management plans of enhancing local production levels to meet the demand growth in emerging markets such as India and their export markets. The Indian two-wheeler industry has witnessed much growth in the last few years, attributable to increased disposable income levels among a rapidly expanding middle class. We expect the industry to attain 20 million units level by 2016 when we are targeting to sell 2 million units and achieve 10% market share.”

“We would also like to thank all the concerned Tamil Nadu government departments, especially Guidance Bureau which had extended its complete support to this project by facilitating as a true single window body”, he added.

The new factory will employ a “theoretical-value-based production” concept that operates on a system of completely synchronized manufacturing of parts and assembly of complete two-wheelers. Furthermore, the new Chennai Factory will be the first in the Yamaha Motor group to have a “vendor park” in its nearby vicinity that will bring together the production operations of main external parts suppliers, thus enabling complete synchronization of external supplier parts production as well. This system will reduce losses in the areas of production management and distribution to extremely low levels in the overall engineering, manufacturing and marketing process, and make the new production base a highly efficient and profitable plant.

The Indian two-wheeler market has continued to grow year by year thanks to factors such as the country’s stable political and economic conditions. In 2011, two-wheeler demand in India exceeded 13 million units, making it the world’s second largest market. For India Yamaha Motor as well, aggressive introduction of new models in the 150cc+ deluxe & premium motorcycle segments have contributed to a strong growth in domestic sales and exports. Total units sold grew from 380,000 in 2010 to 520,000 in 2011, and 23% year-on-year growth to 640,000 units (Domestic: 450,000, Exports: 190,000) is projected for 2012. Forecasts for the next medium-term management plan beginning in 2013 see annual sales of Yamaha two-wheelers exceeding the one million unit mark.