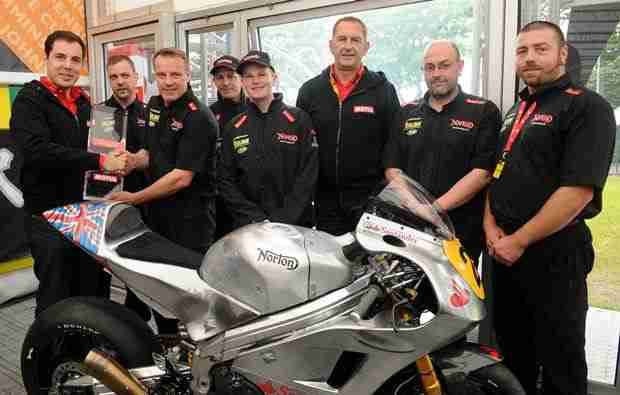 UK Manufacturer Norton, based next to the Donington Park Race Circuit, has won the 2012 ‘Motul Team award for Technical Excellence’ at the Isle of Man TT Races. The event organisers, ACU Events Ltd, and representatives of the Race Committee, which includes the rider liaison officers Richard ‘Milky’ Quayle and John Barton, judged the award.

The company’s appearance in the Senior TT with Ian Mackman riding their machine will be almost twenty years to the day since Steve Hislop rode a Norton to victory in what is widely acknowledged as the greatest TT Race of all time and the company’s MD Stuart Garner is clearly pleased to have achieved qualification this time. A factory backed Norton originally returned to the TT in 2009, after an absence of 17 years, but the machine didn’t finish a practice lap and so failed to qualify for the races.

“It is great to win this award as it really has been a team effort. Everyone who has worked on this also works at the factory and they have done a huge amount of development work in their free time. We’ve also been very fortunate with our suppliers and main sponsor Santander. We are already planning for next year and our long term aim is to be podium contenders.”

“The TT organisation has been hugely supportive and instrumental in getting a prototype back into the class by being flexible over homologation. I think it is hugely important to get a wide mix of machinery and the organisers deserve great credit.”

“This is a thoroughly deserved award and recognises the huge achievement that Norton has pulled off in building a bike in their British factory and qualifying the machine for the Senior TT. It is fantastic to have such a great name lining up on the grid and we look forward to them adding to their great TT record.”