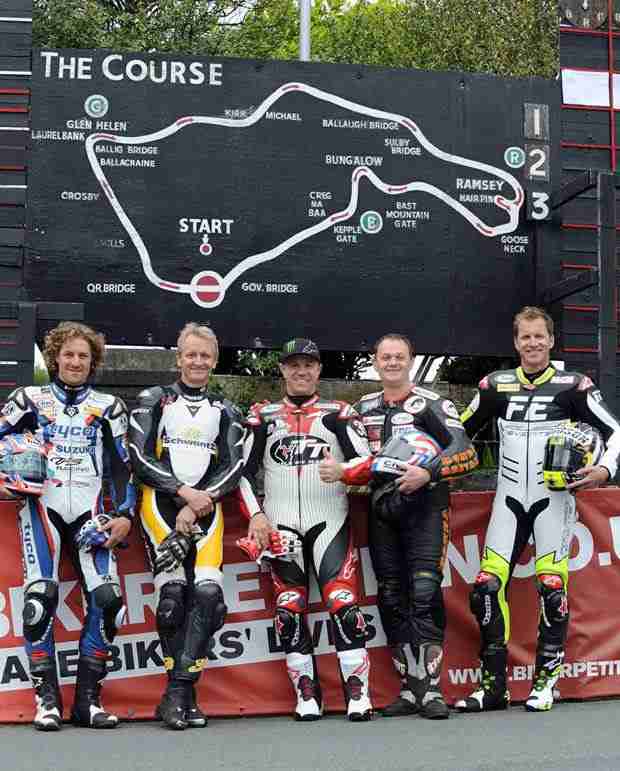 Arai ambassadors Randy Mamola and Kevin Schwantz joined current TT, BSB and WSB riders in this year’s Arai Parade lap on the TT mountain course ahead of a thrilling day’s racing at the Isle of Man TT Races. Randy was wearing a newly designed Aldo Drudi Helmet — the RX-7 GP Arai in a distinctive ‘Randy’ livery – that had been presented to him earlier in the day by Michael Dunlop. The Northern Ireland man joined a number of riders including Ian Hutchinson, Josh Brookes, Philip McCallen and BSB and WSB Champion Neil Hodgson in lapping the famous TT Mountain Course in a parade lap.

Kevin Schwantz, who won a total of 25 races between 1998 and 1994 and stood on the podium in the world championships a further 26 times, appeared on a Suzuki GSXR-1000 while Mamola, widely considered as one of the most talented riders never to have won a world championship but who finished runner up four times, rode a Ducati Panigale.

Randy Mamola clearly enjoyed his first experience of the Mountain Course and commented:

“This event epitomises the spirit of motorcycling. It’s really in your blood. I really enjoyed the lap but I think the British guys were trying to throw us by sending us straight. Phil came through perfectly. I did however learn that when there is a sign coming it’s an indication that there’s more of a corner.”

Kevin Schwantz was also thrilled at being involved with the event and said:

“I have more and more respect for what these guys do. It is a completely different, skill and mindset and you need a memory like an elephant. It makes Grand Prix racing look easy.”