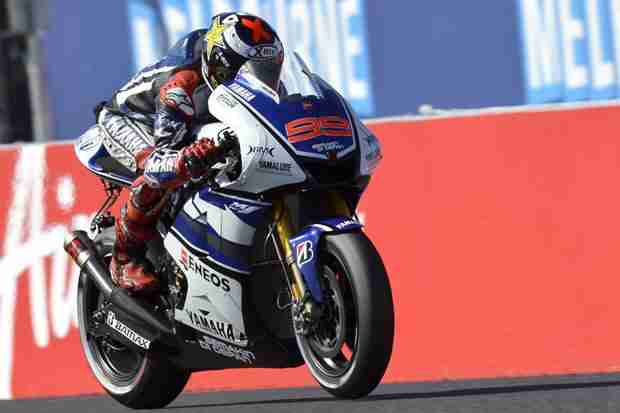 Yamaha Factory Racing returns victorious to Spain this week for the 2012 season finale, the Gran Premio Generali de la Communitat Valenciana, as World champions. Jorge Lorenzo clinched the title at Phillip Island two weeks ago with one round still remaining, becoming the first ever Spaniard to claim two premier class world titles. The World Champion is now free to enjoy his last home Grand Prix of the season free from pressure in front of his Spanish fans. The race will be especially enjoyable for Lorenzo as he was forced to miss the 2011 Valencia round as he recovered from injuries sustained in a warm up crash at Phillip Island.

Katsuyuki Nakasuga will make his second appearance at Valencia in the premier class this weekend, this time as a replacement for Lorenzo’s team mate Ben Spies who continues to recover from injuries sustained in Malaysia last month. Nakasuga has already proved a worthy substitute rider on the M1, taking sixth at Valencia last year and ninth at this year’s Motegi race as a wildcard rider. The Japanese rider also arrives in Valencia as a champion having recently secured the All Japan Superbike Championship title for the second year running.

“This is the last round of the season, it’s a great feeling to be coming home to my Spanish fans as the world champion. It’s been a long, tough year and we have all worked so hard to get here, now this weekend will be one to enjoy for all of us with less pressure. I will of course still be pushing for the top step of the podium, it would be amazing to end the year with a victory.”

“It’s a big honour to be chosen by Yamaha again to represent them at Valencia. The level of the talent is so high in the MotoGP field but I will do my best to make Yamaha proud with this opportunity. As the Yamaha test rider this is also a good opportunity to gain further valuable data for the M1.”

“Here we are finally at the end of a long tough season! What better way to arrive here in Valencia than as world champions, this means we can all enjoy this final race that little bit more with a little less pressure. We are all looking forward to the race, Valencia is always a great crowd so we plan to put on a good show for the fans and end it in style.”

“It’s with mixed emotions that we come to the last race of the year, we are obviously overjoyed to be world champions, a very deserved title after all the hard work Jorge and the team have put in to get there. On the other hand it is a great shame we won’t have Ben with us for what would have been his final appearance for Yamaha. We wish him well with his recovery in the US and we welcome Nakasuga-san back into the team for this round. We are confident that he will adapt quickly again to the GP grid and exceed expectations on Sunday.”