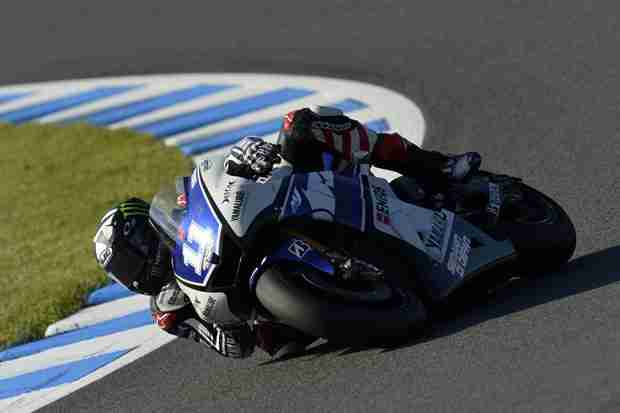 Yamaha Factory Racing riders Jorge Lorenzo and Ben Spies made a strong start to the Grand Prix of Japan today in the first free practice sessions. Championship leader Lorenzo was straight to the top of the time sheets as the morning session began and was unchallenged for the duration. Team mate Spies was also quickly up to speed, initially running in second behind his team mate before dropping slightly to fifth, 0.7 seconds from the front at the end.

The afternoon session saw more of the same class leading pace from Lorenzo, topping the session from the start and only surpassed by Championship rival Pedrosa towards the end by 0.102 seconds. Spies also continued to improve from the morning session, making steps in the set up to bring his time down by nearly half a second. The Texan completed day one in sixth in the combined times with a 1’46.912.

“We started in a very good way here, much better than in Aragon where we had issues with the life of the rear tyre. We have a very good pace and with a little change in the electronics were able to go a bit faster. We tried with the hard tyre, for me it’s not better than the soft although we can go fast on it. For tomorrow I think the soft one will be better. The Hondas are very good here but our bike is also so I think we can fight with them for the victory.”

“Today wasn’t bad, the second session was a bit slow in the beginning but we got going pretty well in the end. We didn’t try the soft rear but focused on trying to make the hard tyre work in case it’s the race tyre. I think it’s unlikely as everyone who went out faster than us at the end was on the softer option, so to be eight tenths off on the hard is not so bad. I think with the soft we’ll see a true result of where we can be and what the bike is capable of.”

“A very good two practice sessions today, Jorge was first this morning and second in the afternoon and very close to Dani. He has a good feeling with the bike but obviously we need to improve a little and the track will also get better over the weekend I think. Overall a good first day.”

“A good start, we still have to figure out some balance for the bike but the set up is not that far. Hopefully tomorrow we will decide on the rear tyre for the race, we found the right front option today. Jorge delivered very consistent lap times with both the hard and soft tyres; the soft especially was really used so his first day is very promising.”