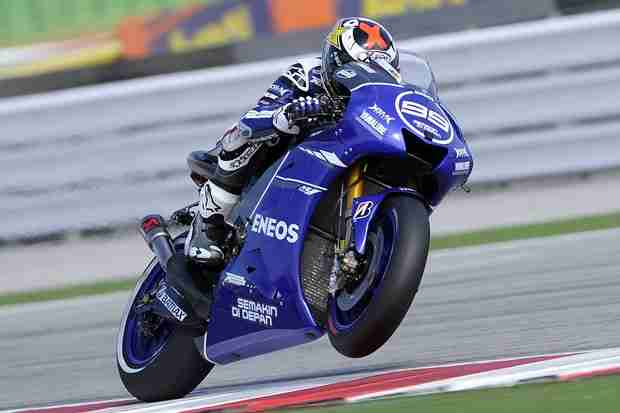 Yamaha Factory Racing rider Jorge Lorenzo continued his Spanish duel with rival Dani Pedrosa today. The two protagonists kept the pressure on to the last minute, Lorenzo eventually taking second on the grid, just 0.018 seconds from pole for tomorrow’s Grand Prix of San Marino. The afternoon’s on track action was the first dry session of the weekend, leaving the riders little time to find an optimum set up.

Fellow Yamaha Factory rider Ben Spies started qualifying well, consistently running in the top five as his crew worked on their dry set up. An unfortunate crash in turn one after hitting a bump off the racing line then relegated the Texan to his second bike which had a different set up. As a result he was unable to improve his time in the remainder of the session so will start from eighth on the grid.

“The session was really hard as it was our first dry one. I struggled at the beginning to get the pace as we only had that hour of dry conditions. At the end I was able to get much better every lap and improved the bike a little bit. In the end we missed pole by such a little time. We are very close to Dani so I think everybody is waiting for a big battle tomorrow.”

“It was unfortunate this afternoon, we just got off the line a little and hit a bump in turn one. That was the bike with the set up we were comfortable with. I had to go out on the other bike and there was no time to change the set up. We still need to make some changes to the other set up for tomorrow as we know we had some things to work on before the crash. I’m actually confident we can go pretty quick but with the way the weekend has been we haven’t had enough dry time yet to finalise a perfect set up.”

“A very hot qualifying session, again Jorge and Dani were very close. It was pretty interesting as the first dry practice, the two of them ending up so close should make it exciting for the race. The bike feels ok, but it’s not perfect yet which is expected with so little dry time. We’ll work on it and try to have something even better for tomorrow.”

“Unfortunately we lost three sessions due to the weather so today we couldn’t have two bikes with the same set up for qualifying. Ben’s crash damaged the bike with the better set up, then he jumped on the other one but the set up didn’t allow him to be faster. Tomorrow we’ll try to improve it in warm up and I am confident we can be with the front guys in the race. Jorge did a good job, they worked hard to find a good set up and I think they will find another step tomorrow for him.”