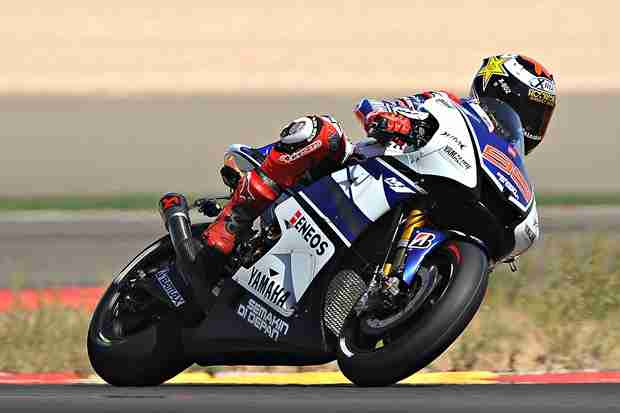 Yamaha Factory Racing riders Jorge Lorenzo and Ben Spies return to Italy this week for the Grand Prix of San Marino at Misano World Circuit Marco Simoncelli. After a successful two-day test in Aragon last week the riders are relaxed and positive about their chances this weekend. Championship leader Lorenzo arrives with a 13 point gap to closest rival Dani Pedrosa at a circuit which witnessed a faultless victory for him last year and three prior consecutive second place podium finishes preceding that.

Team mate Spies has always performed for the crowd at the Misano circuit, taking two sixth place finishes after multiple overtakes in both 2010 and 2011. The Texan also has a World Superbike victory under his belt here from his 2009 Championship winning season.

“We arrive at Misano now which is a track I like very much, we had a great victory here last year and many podium finishes. We are still leading the Championship so we must work hard this weekend to keep it and if possible to increase it. We will aim for the podium and if it is possible, the victory.”

“Misano is a track I really enjoy riding, I’ve had some great races here. I think if we’d had a couple more laps last year then I could have maybe been past Andrea and Marco. It’s been an unbelievable year but we’ll give it 100% as always this weekend and fingers crossed it’ll be trouble free and we can show our true potential.”

“We have just six races to go now. Misano was very strong last year for Jorge and a great victory. After a very exciting Brno race we want to try to increase the point lead. I think it will be exciting again this weekend so we need to try to win but stay calm.”

“After a very positive test in Aragon we are now looking forward to racing again at Misano. The circuit has been good for both Ben and Jorge so we are confident we can achieve good results. It’s kind of a home race for the team being based in Italy so we’re all looking forward to getting started on Friday morning.”