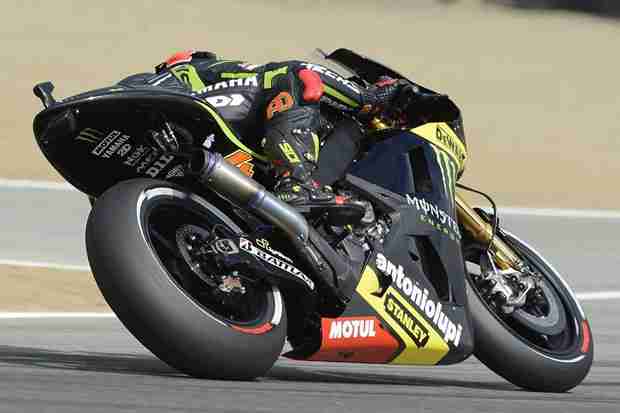 Monster Yamaha Tech 3 Team riders Cal Crutchlow and Andrea Dovizioso will start next to each other on the second row of the grid for tomorrow’s 32-lap US Grand Prix at the spectacular Laguna Seca track. Crutchlow powered his YZR-M1 machine to the fifth fastest time in a record-breaking qualifying session this afternoon, while Italian team-mate Andrea Dovizioso will line-up one place further back on the grid in sixth position. Factory Yamaha rider Jorge Lorenzo claimed a stunning pole position with his 1.20.554 the fastest ever lap of the California track, but Crutchlow and Dovizioso were able to set an impressive pace in a s ession run in gloriously sunny conditions. This afternoon’s weather couldn’t have been a bigger contrast to those that greeted the paddock this morning when Crutchlow and Dovizioso virtually missed a whole session because of cold and foggy conditions. Both quickly made up for lost time this afternoon and concentrated on analysing the soft and hard compound Bridgestone rear tyre options ahead of tomorrow’s race. Crutchlow was once again the top non-factory qualifier with a best lap of 1.21.268 securing him a place on the second row for the sixth time in 10 races and he finished just over 0.3s away from Dani Pedrosa in third position. Dovizioso was only 0.271s further back in sixth place, his best time of 1.21.538 clinching him his best starting position since he was sixth for the Catalunya round in Spain last month.

“We made a good improvement from yesterday even though I coul d only do eight laps this morning because of the conditions. I have been inside the top six all weekend and that is a huge step forward compared to last year when I had a really tough weekend and was riding around outside of the top 10. The Monster Yamaha Tech 3 Team did a fantastic job last night to repair the bike I badly damaged in the crash in practice and hopefully a fifth place on the grid and a strong performance today repaid them. The second row is a good starting position and I’ve had decent pace all weekend, so I’m looking forward to the race. I’ve been consistent and fast on both the hard and the soft tyre so the final decision will depend a lot on air and track temperature tomorrow.”

“We improved the bike a lot this afternoon and it was quite a busy session because we lost a complete practice this morning with the weather conditions. We had to change the work p lan a little bit but we got everything we needed to accomplish done in the afternoon and I am happy and ready for the race. My race pace is good and I think I had the potential to be a bit higher up the grid but each time I tried to push on the soft tyre I encountered some traffic and couldn’t get a clear track to put a whole lap together. It is going to be a very tough race tomorrow because the top three are so fast and I hate to say it but it looks impossible to beat them. I have worked a lot on the soft and the hard tyre and I like both, so we will have to decide which one we take for the race based on the conditions.”