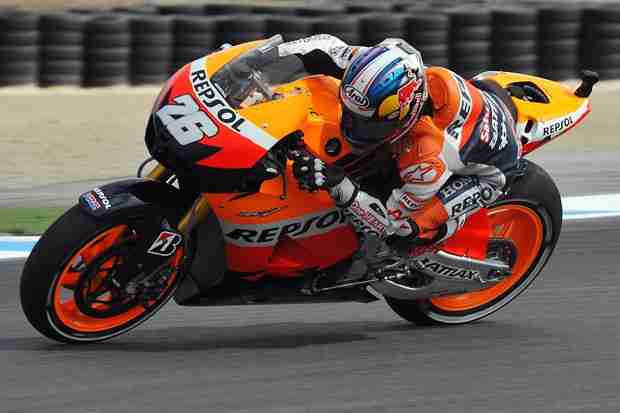 The always spectacular United States Grand Prix began today with the opening day of practice at Laguna Seca. The tenth race on the World Championship calendar, the event features the MotoGP class out on its own, with the Moto2 and Moto3 categories not travelling for the contest and beginning their break. It was Dani Pedrosa who took the early initiative at the Californian track, dominating both the first and the second session. Teammate Casey Stoner placed third, just behind World Championship leader Jorge Lorenzo.

Following a positive test at Mugello after the last round of the series, the premier class headed across the Atlantic for one of the most eagerly anticipated weekends of the year. With both a standard Repsol Honda RC213V and the prototype debuted two weeks ago in Italy at his disposal, Dani Pedrosa started strong Stateside. The Spaniard alternated between the two machines during the two practice sessions, continually lowering his times, before finally stopping the clock at 1’21.088 –three tenths of a second faster than both Lorenzo and Stoner.

The Repsol Honda Team’s Australian rider also had both bike models available and also made constant improvement over the course of the day. Stoner worked on finding a setup to give him the most stability on the twisty American track and to feel more comfortable on corner exit, reduce chatter and avoid fast rear tyre degradation. The reigning World Champion’s best time was 1’21.457, 0.369 off Pedrosa.

The Repsol Honda Team will have another chance to work on their setting tomorrow in the third free practice session, before the decisive qualifying run in the afternoon.

“We did a good job today, we managed to get a good lap time in the morning and improved it in the afternoon, although the grip level was very poor and we struggled a bit with the rear. The tyres were working a little better in the afternoon, but it was hard to work on the consistency due to the lack of grip. I hope to be able to work on the pace tomorrow to prepare the race. The new bike is working good here, I will continue working on the set up tomorrow”.

“It hasn’t been a particularly eventful day, we didn’t really get the package we were hoping for. We struggled a little this morning with stability on the soft tyre, we improved it slightly this afternoon on the hard tyre but found the bike to be quite aggressive and there wasn’t much grip.

We have a few things to try tomorrow morning, if we can make some small improvements then we’ll be very happy with the bike. As it is now, we need to improve before we can say if we’re competitive or not”.