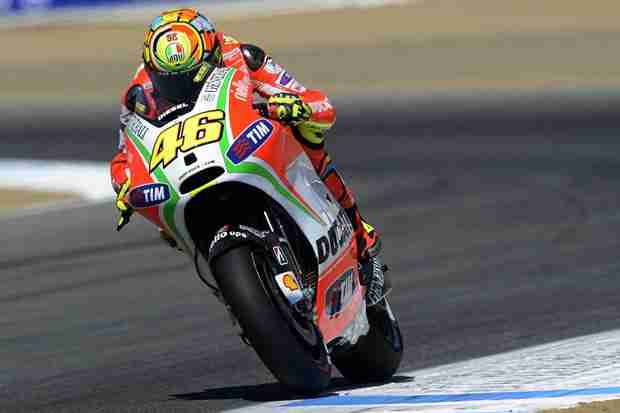 Laguna Seca’s thick, wet fog typically burns off relatively early in the morning, but it persisted for today’s final free-practice session for the United States Grand Prix, reducing the useful track time and prompting most riders to wait until the final ten minutes or so before leaving the garages.

The afternoon qualifying session took place in normal conditions, but Nicky Hayden and Valentino Rossi didn’t manage to find the best setup to ride the California circuit effectively. Tomorrow will see them starting from the third and fourth rows, respectively.

“After the performance we had in the race at Mugello and then again in the test, we expected to be a lot closer to the front than this. It’s a bit frustrating to be over a second back, especially at a little track like this where even three or four tenths is a lot. Tonight we’ll decide if we want to make big changes for tomorrow or try to refine what we have, and the main priority will be to settle on a tyre. The morning warm-up might not be very useful if it’s foggy again, but we’ll see what tomorrow brings and give it our best shot.”

“As long as we ride at our race pace, we’re close to the two or three other riders in the second group. Unfortunately though, just like at the last race, when we try to do a fast time, we’re not able to improve enough. When I put on the soft tyre, it creates more problems, which are always the same, really: to avoid having the tyres start sliding too much after a few laps, we must load the rear a lot, and that causes us to lose feeling with the front. As long as I ride at a 1:22 pace, I’m able to be pretty consistent, but when I have to push harder, the front starts to close. The bike moves a lot and I go wide. Anyway, we’ll see. I’m tenth, but my rhythm is a bit better. Obviously, I’m expecting a difficult race tomorrow.”