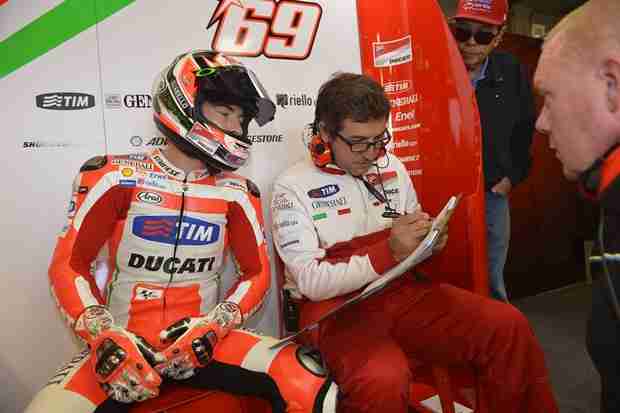 The Ducati Team, which today announced Nicky Hayden’s re-signing for next year, began its preparation for the United States Grand Prix that will take place on Sunday at Laguna Seca. At the end of the first day of practice, Nicky Hayden and Valentino Rossi were seventh and ninth, respectively. The Italian crashed without injury ten minutes from the end of the afternoon session, and therefore wasn’t able to try for a time with a soft tyre.

“It’s been a tougher day than I was hoping, especially after the great news this morning. In the first session I wasn’t going that great, and then on the last exit we had a problem with the brakes. This afternoon we went quite a bit faster, but at the moment, the hard tyre feels a bit too hard and the soft is a bit too soft. We need to choose one and set the bike up to work with it. At Mugello we felt like we were the closest we had been in a long time, so to be over a second off on such a tight track here is just too much. We need to stay calm and chip away at it tomorrow.”

“I crashed ten minutes from the end of the second session and couldn’t use the new soft tyre that we had just put on. It was my mistake because I felt that I had much more grip and immediately pushed hard from the first lap, but I had a hard tyre on the front and when I entered turn three a bit wide, I think it was still a bit cold and I fell. The important thing is I’m fine, but it’s still a shame because after that I rode with the hard rear and was sliding too much to improve my time. I think that our potential for being in the second group is pretty good, not far from Crutchlow and Dovizioso. We’ll see tomorrow as we continue riding with the setting that I like the most, the one that I crashed with and that I didn’t use with the soft tyre today.”