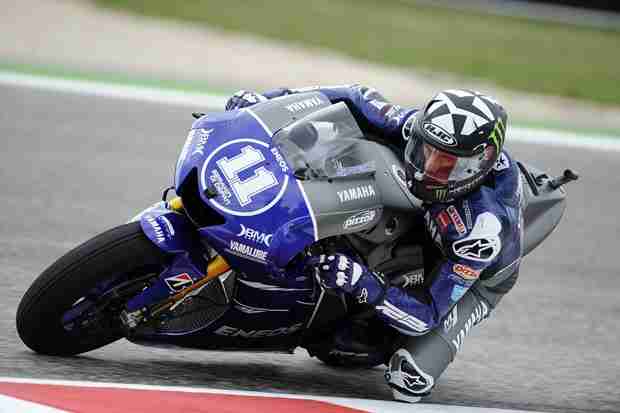 Yamaha Factory Racing riders Jorge Lorenzo and Ben Spies head back to Spain this week for round 14 of the 2012 season, the Grand Prix of Aragon on the 30th September. Championship leader Lorenzo prepares for his penultimate home race of the year bolstered by the recent Aragon test which saw both he and his team mate make big improvements to their set up for the Motorland circuit. A win has so far eluded him in Aragon, scoring a third place podium finish in 2011 and just missing the podium by less than a tenth of a second in 2010. A convincing victory at the last round in Misano puts Lorenzo 38 points clear of closest rival Dani Pedrosa as the Championship heads into the final five races of the season.

Team mate Spies arrives in Aragon looking to build on his fifth place finish in Misano following a trouble free weekend for the incident dogged Texan. With two fifth place finishes at the Motorland circuit from 2010 and 2011 already achieved, Spies will be looking to capitalize on the recent testing to fight for the strongest result possible.

The Motorland circuit is situated near the town of Alcaniz in Northern Spain, a few hours drive from Barcelona. Designed by Hermann Tillke, the circuit is fast and challenging with spectacular elevation changes and flowing corners. The Yamaha Factory Racing team will again run the ‘lucky’ Race-Blu livery that brought victory for Lorenzo in Misano.

“Aragon has not been the strongest track for us in the last two years, but I think we have found something in recent testing which will help us to be more competitive here. We will try to make a good show for all the Spanish fans who come to see us and we will try to win.”

“We had a really good test here a few weeks ago so I’m hoping the conditions are similar. We’ve got a really good base set up for the track so we should be able to get onto the pace quickly on Friday morning. It was great to have a weekend in Misano with no issues, I’m hoping it will be like this for the rest of the year so we can concentrate on just giving 100% on the track.”

“Aragon has not been our best track previously however we should be more competitive this year. We’ve got a good set up and a fast pace from the test recently so we’re confident Jorge can be up there from the start. With just five races to go it’s important we try to keep and grow as much of our Championship lead as possible, we need to be on the podium and win if possible!”

“We are going to Aragon with confidence having completed a very successful test here just a few weeks ago. We worked hard with both Jorge and Ben to improve the YZR-M1 set up for the track and to deliver better tyre life for the race. Jorge has a good lead in the Championship but we cannot afford to make any mistakes with five races still to go.”