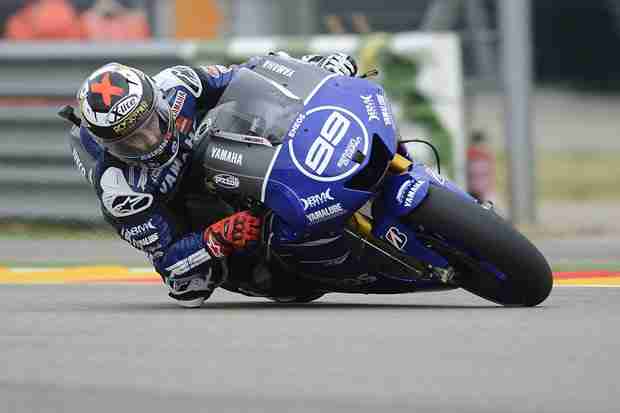 Yamaha Factory Racing rider Jorge Lorenzo emerged the victor in an intense qualifying battle today, securing the pole position for tomorrow’s Grand Prix of Aragon at the Motorland circuit. The Championship leader started the first dry session of the weekend quite slowly, gradually picking up the pace to join the battle between his team mate Ben Spies, Cal Crutchlow and Dani Pedrosa for the top spot. It was with his last fresh tyre just three laps from the end of the session that Lorenzo delivered, putting down a 1’49.404 lap to secure pole 0.088 seconds ahead of Pedrosa. The pole is his fifth of the season.

Texan Spies threatened to make it an all Yamaha front row this afternoon, consistently battling with the top three and briefly taking the top spot on the timesheets. His fastest lap came just one lap before the end of the session, delivering a 1’49.748 lap and missing the front row by just 0.172 seconds.

“I feel happy, I really thought Cal would take pole position because his lap time was really quick but finally we managed to improve our lap time with the last qualifying tyre. It’s important to be on the front row in pole position but tomorrow is what counts, we have to do a lot of laps and it’s going to be a long race. Let’s see how the weather is, we all hope it’s not going to rain, it’s much better if it’s dry.”

“In the end we weren’t too far off the fastest guys. The session was quite tricky in the beginning, very slippery in parts and quite different to when we tested here. In the end we did an ok job, we didn’t make a perfect qualifying session but honestly speaking after seeing some of the crashes I was probably being a bit cautious. It was the first dry session of the weekend so it’s quite hard to go full speed that quickly. The bike is working well so a good warm up tomorrow morning and we’ll be ready for the race.”

“A very important pole position, circumstances were very difficult because it was slippery and cold so in the beginning we weren’t so fast. We knew what times we had achieved in the test but it was important not to lose concentration and make a mistake today.”

“We wrapped up today with pole which is always a great result. I think the test we had here was very helpful, this makes our work a lot easier this weekend. The only thing that could have been sweeter today would have been to have Ben on the front row too. Ben has a good set up so let’s hope tomorrow will be dry.”