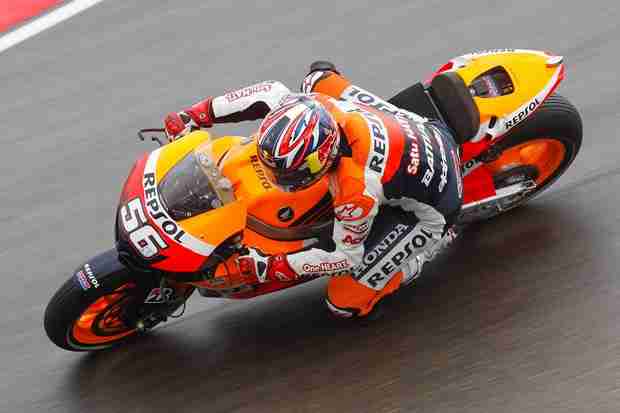 Rain heavily affected the opening day of action at the AragÃ³n GP, resulting in Dani Pedrosa completing just a solitary lap in the morning. He was more active in the second session and was just 66 thousandths of a second off fastest rider Ben Spies. Teammate Jonathan Rea, standing in for Casey Stoner, was eleventh and opted against riding in the morning.

The first practice session for the MotoGP class at MotorLand AragÃ³n was reminiscent of that of Misano two weeks ago. After overnight rain, the track never dried out and did not lend itself to safe riding. The majority of riders decided to stay in their garages, rather than taking needless risks. Just nine riders went out on track, with Nicky Hayden the fastest of those. Dani Pedrosa performed one lap, before noting the lack of grip and sitting out the remainder of the session. Teammate Jonathan Rea did not even attempt a lap in the first session of his second MotoGP race weekend.

Rain began to fall more consistently in the lead-up to the second session and the track was left completely wet –and thus all riders decided to begin work. Dani Pedrosa was continuously up at the sharp end and led the way for most of the 45 minutes. He undertook 16 laps and was the second fastest of the session, with a time of 2’00.285 –just 66 thousandths of a second off eventual session top man Ben Spies. Jonathan Rea continued his adaptation to MotoGP with 15 laps of MotorLand, with his best lap a 2’04.046 that put him in eleventh.

Tomorrow the Repsol Honda Team riders will undertake a third session of practice laps in preparation for afternoon qualifying, which will decide the grid for the Aragon GP.

“At least we had a full wet session this afternoon to work with the bike and I felt quite good. I was catching the pace step by step, even though the grip was not very high in the rear, and we still have to adjust the setting a little more to improve in some corners. It looks like the weather forecast is also bad for tomorrow, so it will be important to take advantage of the morning practice to be well prepared for qualifying”.

“It’s been pretty frustrating because I feel like we’ve lost another day, it’s the same story as Misano! It was the first fully wet session we’ve had and the big difference for me was with the tyres and when they lose traction you can play with the rear grip slightly. I was riding a little too cautious today and I feel I need to push the tyres more and be more comfortable with the bike moving around.

I wasn’t too happy with myself as in the last few laps this afternoon I was on personal best sectors and I made a few mistakes as the front tyre didn’t feel very stable on the carcass. I guess we need to be thankful we were able to test here a few weeks ago and we completed over a hundred laps so for the dry we should be ok, but in the wet my feeling is still not 100%. Let’s see what the conditions bring tomorrow”.