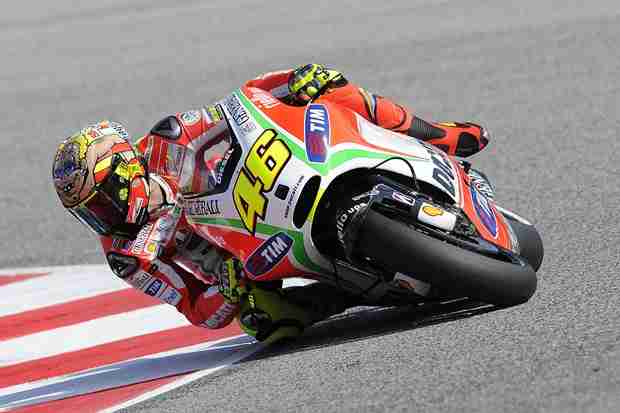 The Ducati Team is preparing to return to the track at the Spanish Aragon circuit for the fourteenth round on the championship calendar. The season is entering its final phase, which will conclude at Valencia, with three consecutive extra-European races to run in between the two Spanish races.

At these final five races, Valentino Rossi and Nicky Hayden will look for confirmation on the recent progress made with the development of the Desmosedici, as they’ll put the new chassis to the test on a series of very diverse tracks within a relatively short period of time. The American, who finished on the podium at Aragon in 2010, will be able to more thoroughly analyse the new components, having had the opportunity to allow the injury to his right hand to recuperate more than had been possible for the post-race test at Misano.

“We come to Aragon with a positive outlook after the Misano result, even if we also know that every race has its own story. It will be our first chance to check if the progress we’ve made will also be confirmed at this track, which is very different from Misano. It’s fast and challenging, and managing the tyres at lean angle is very important. Concerning that, during the test after the last race, we tried a swingarm that I liked as it provides a bit more grip with the bike leaned over and stresses the tyres less. Anyway, we’ll see. It will be a chance to understand if we’ve really improved.”

“For me, Aragon is a fun circuit. I like tracks that have a bit of elevation change, and Aragon definitely has some ups and downs. There are also some blind parts that make it technical but also enjoyable, as well as some good places to pass. I’m looking forward to seeing how much better my hand will be than it was at Misano, and also to having the new chassis. I definitely had a little bit better feeling with it at the test, so it will be nice to go there and start with it. I’m sure we’ll need to make a couple of adjustments to the setup, but I’ll be interested to see how we can get on there.”

“We come to Aragon after a positive race with Valentino at Misano, and after a test that gave us some promising signs. It will be interesting to check if what we’ve found works as well on a completely different track. Anyway, back home we’ll keep working just as hard on development. In addition to Vale, we’ll be able to count on Nicky’s feedback at Aragon, as he’ll certainly be in better shape than he was at Misano, although probably still not 100%.”