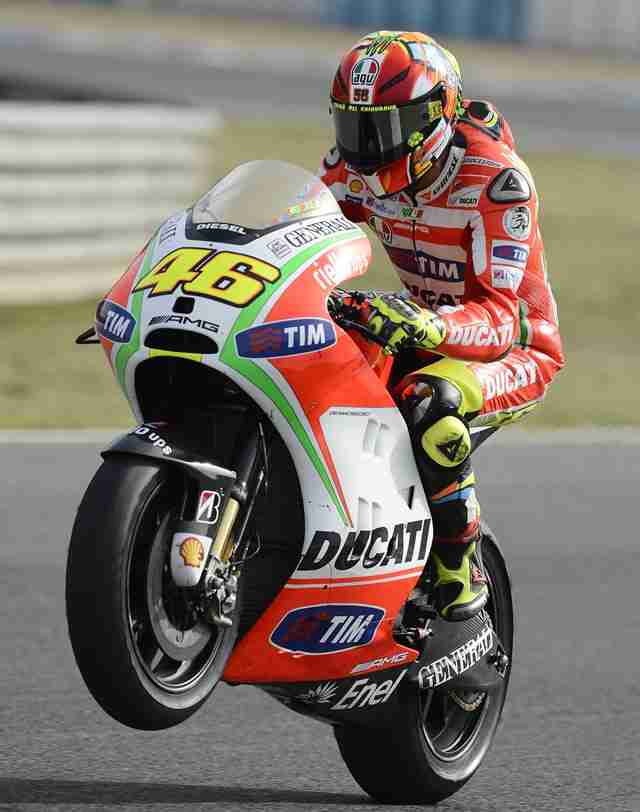 2012 will be a monumental transition year for MotoGP with GP and CRT bikes running together while Dorna is trying to push the MSMA hand in making the prototypes more affordable, but this will not be enough to save the championship following the long wave of global financial difficulties and the lack of big money spending sponsors (sounds a lot like Italy, big budget cuts, new tax hikes and no investments) so here are some of the new cost-saving proposals that have come from Carmelo Ezpeleta during this past weekend at Jerez and some of which might be finalized during the season opener in Qatar, while May remains the deadline.

1. One bike per rider

As in Moto2, Moto3, British Superbikes and from this year also in World Superbikes, but it would also mean no more flag-to-flag races in case of weather condition changes during the race, while we wait to see which team is faster in changing tires and carbon brakes to steel ones, and in case of a crash the mechanics would be harried to get their rider back on track as fast as possible.

Combined with the one bike and a spare one waiting in the one of the trucks, five engines should be enough for the season and would contribute to further money saving, but the engine situation between MotoGP teams and CRTs will probably still remain lopsided and continue to be in favour of the newest arrivals.

This will be up to Yamaha, Honda and Ducati and if they can provide their satellite bikes for â‚¬1 to 1.2 million and make CRT bikes less appetizing for teams who want to enter MotoGP. Yamaha has said yes it is possible, but it will depend what the whole packet will include, Ducati has gone on the record to say that it is impossible to keep up the technological standards for that amount, Honda hasn’t really said nay or yay yet, but IRTA’s Herve Poncharal has gone on the record in an interview with French TV show Studio Inside (via website GP Inside) that next year’s contract leases are already being lowered by 50%.

One bike, one less mechanic. Even if sounds like they’re advocating putting a mechanic on the dole – teams would save on wages, travel and accommodation, even if the mechanics already fly economy (that measure was passed in 2009) and many who work for poorer teams sleep in the back of the trucks, and eliminating a mechanic won’t go down well for some riders like Valentino Rossi and Casey Stoner who pride themselves on the essential role that pit crews are for them – they call them their family – and have brought them with them when they switched teams. And in case of a crashed bike we would be back to the harried mechanics who will have more work to do.

On this there will be some head butting between the members of the GP Commission, with talk of setting the limit at 15,000 RPM or even lower, which would physically prevent hitting certain top speeds (which was why the 800cc format was introduced) and could allay some of the recent fears that certain riders have of reaching 360km/h at super fast tracks with very long straights and also help put the CRT teams that use production based engines in the same league.

This idea will be met with the most resistance by the MSMA – everyone is extremely jealous of their software (and investments in this field) and electronics strategy. Electronics in MotoGP is still a bad word amongst fans – even though we have a simpler version of it on many street bikes.