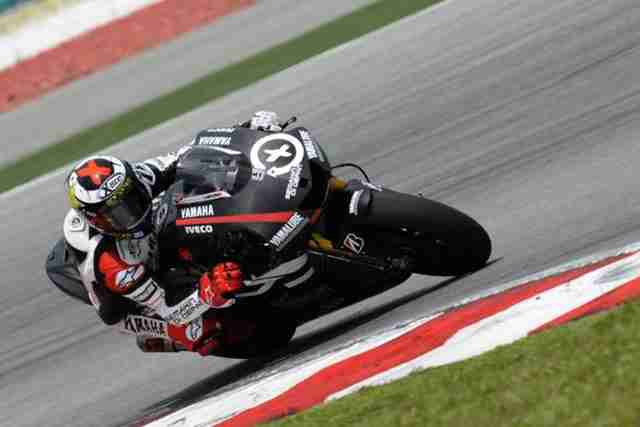 MotoGP 2012 finally got underway today with the first of three days of testing at the Sepang circuit in Malaysia. Yamaha Factory riders Jorge Lorenzo and Ben Spies took their first ride on the 1000cc YZR-M1 since last year. Both riders blew the cobwebs off quickly and settled down to an impressive pace, Lorenzo proving to be the fastest man on track with his team mate always close behind him.

Due to early morning rain, the track conditions were not good enough to go out on track until midday when HRC test rider, Kosuke Akiyoshi performed the first 10 laps on Dani Pedrosa’s bike and then jumped onto Casey Stoner’s machine to complete a further 4 laps and confirm that everything was working well. Dani set the second fastest laptime of the day with a 2’02.003 and completed a total of 48 laps on a bike similar to the one he tested in Valencia in November.

Dani was the only Repsol Honda rider on track with the new RC213V as current World Champion, Casey, pulled his back whilst warming up and preparing to go on track for the first time this season. The Australian rider received some treatment from a physiotherapist and after resting this evening he will hopefully feel better tomorrow and be able to begin his testing program.

The focus for the first day was to get back into the swing of riding and also to establish a good base set up. Tomorrow and the day after Lorenzo and Spies will compare various new settings to provide valuable data for the second Sepang test in one month’s time.