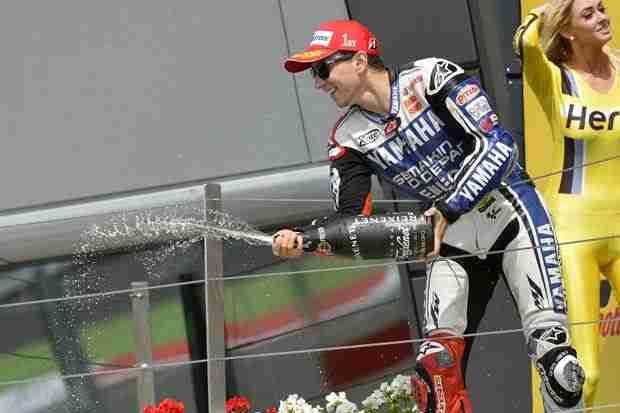 Yamaha Factory Racing rider Jorge Lorenzo put in superb performance today for the Grand Prix of Great Britain, taking victory at the Silverstone circuit, his third consecutive victory this year. Having started from fourth on the grid, he dropped to fifth at the start and held position until lap six when he carved through to take up second place behind Casey Stoner in the lead. Stoner was only able to hold him off for four laps before the Championship leader made his move, the pass a beautiful battle with his rival over several corners. Lorenzo then led from lap 11 to the finish line, a small mistake four laps from the end causing him to sit up was the only threat to victory. He crossed the line 3.313 seconds ahead of Stoner, taking maximum points and increasing his lead in the 2012 standings to 25 points. Lorenzo heads to Assen in two weeks time now having won four of the six races of the season with a point tally of 140. The victory also increases Yamaha’s lead in the Constructor’s standings to 140, 14 ahead of Honda.

Ben Spies made a dazzling start to the race, shooting from the front row to take first place by turn one. The Texan then delivered four perfect laps at the head of the pack and was looking in dominant form until a dramatic drop off in tyre grip dropped him to second by lap five behind Stoner. As he fought to maintain a competitive race pace he gradually dropped to fifth, a position he held to the finish line. The result is his best finish of the season, awarding 11 points and bringing his tally to 35 and keeping him in 11th place in the standings.

“Today was a very difficult race, the front guys were very strong and very fast so it was very hard for me to catch them and stay with them. Little by little the rear tyre drops a bit more, I had good confidence and I was faster than them and I started to catch them. When I caught up I didn’t want to crash so I waited for my moment and was patient. When I caught Casey we had a wonderful fight, luckily for us I had a better pace and I passed him. Four laps from the end I made a big mistake and almost crashed! I’m very happy with the result, and for the team who gave me a good bike again.”

“Today was a bitter sweet day, we made a good start and had a really good pace in the beginning. After four or five laps we had a big problem with the rear tyre and lost all our momentum and pace. It turned into damage control after that. From the start of the season to now, top five is a better result. The potential of the bike was great today and we could have been fighting for the podium or the win with Jorge.”

“Today was the third victory in a row after a difficult weekend of very mixed conditions. There were lots of unpredictable circumstances so a great victory for us. After a lot of hard work from the team Jorge kept his patience in the beginning and pushed on the end as hard as he could, a well deserved win!”

“Another important win for Jorge, the point lead is increasing, still not enough to be comfortable but going in the right direction! Ben made a really great start and led the race for a few laps. Then unfortunately he had quite a huge drop with the rear tyre and he couldn’t keep the same pace. We will now check the reason why we had this issue. We’re going to Assen in the right spirit and looking forward to it.”