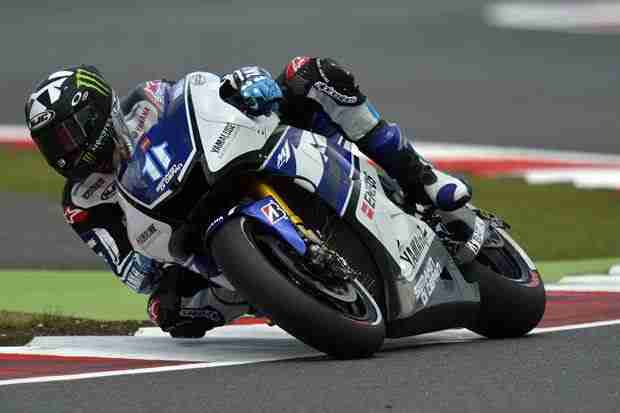 Yamaha Factory Racing rider Ben Spies claimed his first front row start of the season today at the Silverstone circuit in qualifying for tomorrow’s Grand Prix of Great Britain. The Texan timed his hot lap to perfection, and took provisional pole until topped by Alvaro Bautista by just 0.106 seconds. As a result Spies will start on the front row in second position for the race.

Team mate Jorge Lorenzo started qualifying as the early leader having improved on yesterday’s set up. As the session continued he gradually dropped and was in third with just under a quarter of the session remaining. Unfortunately the rain soon followed, negating any possibility of a faster lap. The Mallorcan stayed on track for several laps waiting for a break in the weather but was unable to find a dry lap. As a result he will start from the second row in fourth place for tomorrow’s race.

“It was difficult conditions today again, like yesterday but it was the same for everybody. We tried our hardest, I’m happy for the team as they gave me a great bike and we set our best time with the hard rear tyre. When I put the soft one on we were a couple of tenths up then I made a mistake and hit the curb, I had a good lap going but messed it up. I’m just happy to be on the front row and working well with the team, let’s see what tomorrow brings.”

“That was a so-so session. I had hoped to be on the front row but it wasn’t possible because it started raining so I didn’t have a good fast lap to get up there. I stayed on the track for a while in case it stopped raining but it didn’t happen. Fourth position is not so bad and we have some options to try for tomorrow. It’s going to be a complicated race because it could rain and there will be a lot of wind. Let’s stay calm and see what happens.”

“That was actually quite a positive result for qualifying, maybe not the position but the bike set up was more stable than yesterday which is what we wanted. We still have space to improve as it’s not exactly how we want it. It was also a shame that it was wet at the end as I think it could have been a hot end to the session. I think it’ll be a close race tomorrow.”

“The front row is very important. I think it could have been possible to get pole but unfortunately Ben ran off so we lost the opportunity. It’s also a pity that it started to rain in the last five minutes which compromised the front row for Jorge. The pace of our bikes is very good and everything is working pretty well, including the weather forecast for tomorrow. We’ll wait and see how it is but we’re optimistic and looking forward to the race.”