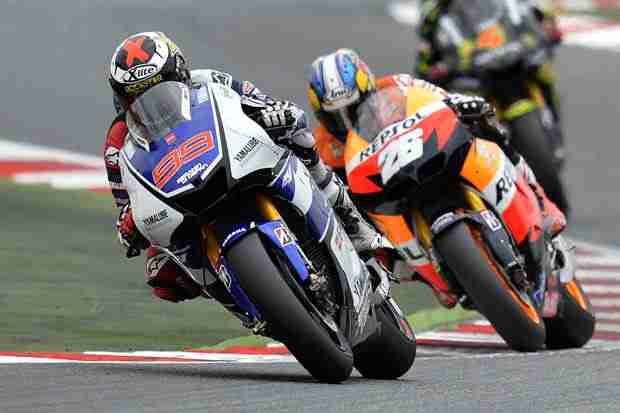 Yamaha Factory Racing riders Jorge Lorenzo and Ben Spies head to Northamptonshire in the United Kingdom this week for the Grand Prix of Great Britain at the Silverstone circuit on the 17th June. The 2011 Silverstone Grand Prix proved to be a difficult one for the team as both riders crashed out of the race in treacherous wet conditions. Lorenzo’s record at the modified Silverstone circuit is otherwise strong, taking victory from pole in 2010, MotoGP’s first visit to the track since 1986. The Championship leader arrives in the UK 20 points clear of closest rival Casey Stoner at the top of the standings and looking to again increase the gap.

The first visit to Silverstone by Ben Spies in 2010 also proved to be a successful one. The MotoGP rookie delivered an impressive performance to claim his maiden Grand Prix podium in front of the British crowd with third place. Despite a rocky start to this season the Texan showed strong promise in Catalunya two weeks ago and will be looking to build on that this weekend.

The 5.9km Silverstone circuit straddles the Northamptonshire and Buckinghamshire borders and was first used for impromptu car racing in 1947. It is most famous as the home of the British Formula One Grand Prix, which was first held there in 1948 and has been contested at the track every year since 1987. Silverstone is no stranger to bike racing, with the 500cc machines having raced there from 1977 to 1986. MotoGP returned in 2010 after extensive alterations to the track including remodelled sections and faster, sweeping corners to tailor it to the current MotoGP machines. With plenty of overtaking opportunities it is sure to provide an exciting spectacle come race day.

“Silverstone is a track I like very much. In 2010 I think I did the best riding of the season, we won with a big advantage. Unfortunately last year it rained and I crashed trying to catch Casey. Let’s see if this year we can repeat the 2010 race. It’s a track which is very positive for Yamaha so I am confident we can achieve a good result.”

“I’m really looking forward to getting back on the bike as soon as possible. We had a good test in Spain and apart from the crash in Barcelona we were really competitive with a great bike. I think Silverstone will be really good for the Yamaha so I’m hoping to get the set up right as quickly as possible with the guys and focus on delivering a good result on Sunday. I really like the track and it’s obviously special for me as it’s where I got my first MotoGP podium.”

“It looks like it might be a dreadful weekend weather-wise again! Last year we arrived at Silverstone struggling a bit. This year we arrive leading the Championship in good form. We are in a good position to enjoy the riding and be competitive. As always we will aim for the best possible result. The crew are working well, we have an excellent base set up for the bike for every race so far and I think Silverstone will be the same story.”

“I’m pretty optimistic for this weekend, after the last test Ben has really got back his confidence with his bike. Now we’re going to a place where he had his first podium in MotoGP, I really believe that if everything goes smoothly he can be on the podium again. Jorge has an incredible rhythm so far this season and I think he can continue this performance at Silverstone.”