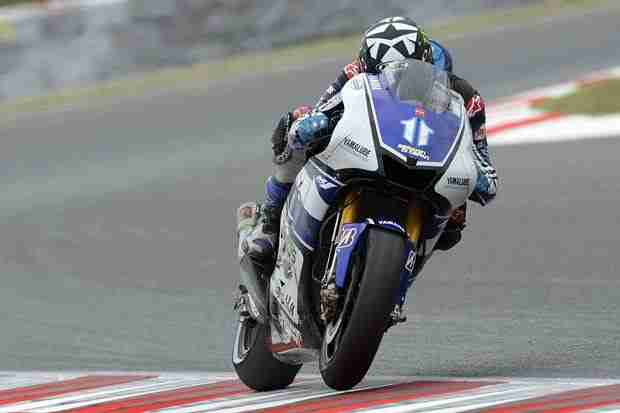 Yamaha Factory Racing rider Ben Spies was quick to find his form this afternoon in the first day of practice for the Grand Prix of Great Britain at the Silverstone circuit. Despite a small crash at turn 15 in the morning wet session, Spies was back out and fast from the start in the afternoon as the sun came out. Having led for most of the session the Texan wrapped up day one in second just 0.034 seconds behind Casey Stoner in first.

Championship leader Jorge Lorenzo spent the first day working with his crew to improve on the front end feeling of his YZR-M1, a task complicated by the changing British weather. A full wet session in the morning followed by a mostly dry but briefly wet afternoon practice was hindered by strong winds on track. Lorenzo ended day one in seventh on the combined times, 0.697 seconds from first.

“Today was pretty good, although we didn’t get off to a great start this morning, I had a small mishap and crashed at T15. I’m happy enough though, even this morning in the rain I was very comfortable on the bike. We got a good dry session in this afternoon as well which is useful just in case we do have a dry race. The bike is working really well, it was pretty windy out there but we made the most of the 45 minutes to try a couple of things and we ended up going pretty quick.”

“It was nice to try the bike in the rain this morning as we may have these conditions for the race. Overall the day was not bad but not very good! We had a lot of problems with the wind in the afternoon session which made it difficult. I don’t feel very comfortable yet, especially on the straight, we have to solve a problem with the front of the bike to be faster. We’ll see tomorrow, I hope we can improve much more.”

“Free practice one gave us bad weather in the morning but at least we had a full wet session. The second session was a bit mixed, a lot of wind and some showers making it difficult for the riders. We are missing something in the steering and the balance of the bike isn’t right yet. It’s the first time here with the 1000cc so we need to work a bit on the setting.”

“The weather hasn’t helped us a lot today but we’ve made a great start to the weekend. Ben started where he left off at the Aragon test with a good pace. He is able to make a fast lap quite easily and his feeling with the bike has been immediately good. Jorge still needs to find something with the balance of his set up but we’re confident he will make a step forward tomorrow.”