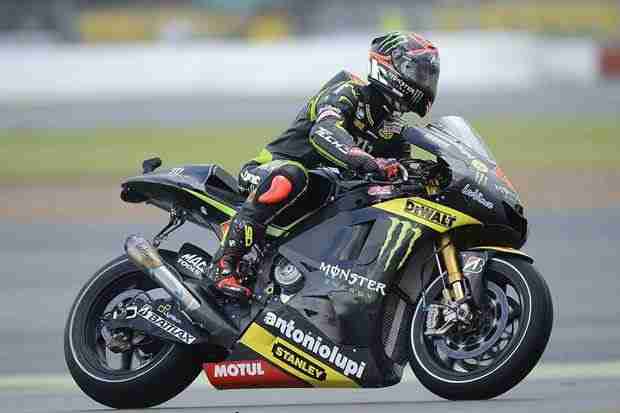 Monster Yamaha Tech 3 Team rider Cal Crutchlow aims to make his British Grand Prix debut at Silverstone tomorrow after escaping injury in a high-speed practice crash this morning. The 26-year-old fell heavily at the Chapel Curve in the early stages of the final practice session and suffered a painful blow to his left foot and ankle.After initial checks in the Silverstone Circuit Medical Centre, he was transferred to hospital in Oxford for scans to discover the extent of the damage.

Extensiv e analysis of the scans has revealed the former World Supersport Champion hasn’t suffered any fractures and he is already able to put weight on his left foot after doctors reduced the swelling around his heel and ankle. Crutchlow will undergo a further detailed assessment with Silverstone medics tomorrow morning, but the Monster Yamaha Tech 3 Team is optimistic that he will be given clearance to start the 20-lap race.

Although Crutchlow was unable to take part in this afternoon’s qualifying session, if declared fit then he can start from the back of the grid having posted the eighth quickest time in practice yesterday.

“It is a big pity that the rain came at the end of the session because I am confident I could have been much higher up the grid. It will not be easy starting from eighth pos ition because it is a very short run to the first corner and you need to be close to the front to avoid any trouble and be in contention right from the start. It wasn’t a very good session and I think some of that is down to me. Like yesterday the wind was really strong and it is difficult to ride close to the limit in those conditions. I just didn’t feel comfortable and because of that I wasn’t relaxed like normal on the bike and I felt rigid. The wind was so strong in places that keeping control of the bike was very difficult. I am still confident that the times I was doing before the rain came will be competitive in the race. We need to wait and see what the weather will do but I have a good record in the British Grand Prix and hope it continues tomorrow. I also hope Cal will be able to start the race. I know his home race is very important to him and all of the Monster Yamaha Tech 3 Team hope his injuries won’t stop him from riding.”

“We are very optimistic that Cal will be able to participate in t he British Grand Prix tomorrow. The medical staff in Oxford said he should be fine to race and he has no broken bones in the foot or ankle. That is a big relief because Cal was in quite a lot of pain. He will now undertake the necessary checks with the Silverstone medics in the morning, but it looks very positive. We obviously hope he will be able to ride after the disappointment of last year when he was unable to start the race because he was injured. I know what it means for him to race in front of his home crowd, who have given Cal and the Monster Yamaha Tech 3 Team unbelievable support this weekend.”