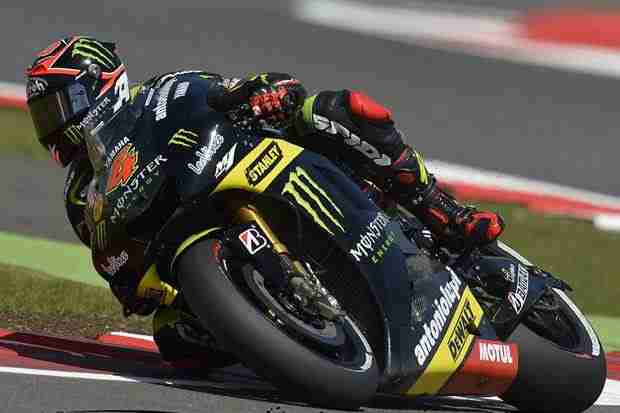 Mixed weather conditions played a pivotal role on the opening day of practice for the Hertz British Grand Prix at Silverstone, which ended with Monster Yamaha Tech 3 Team riders Andrea Dovizioso and Cal Crutchlow sixth and eighth quickest respectively. This morning’s session took place in wet and windy conditions that gave Dovizioso and Crutchlow the opportunity to focus on the wet settings of their Yamaha YZR-M1 machinery, with further rain forecast for the rest of the weekend.

The second 45-minute session was staged in m uch more favourable conditions with blue skies breaking through heavy cloud cover to completely dry the track. Conditions were still far from ideal though as a gusting wind remained that made tackling some of Silverstone’s breathtakingly fast sections a tricky challenge. Dovizioso and Crutchlow were building up their pace when a heavy cloudburst disrupted proceedings with less than 10 minutes completed. The rain interruption forced the duo to wait 15 minutes in the pits before the strong wind quickly dried the surface. Once the action got back underway, Italian Dovizioso was able to set a best time of 2.05.448 that put him sixth on the timesheets.

Dovizioso finished less than 0.5s away from third spot and he is confident that in wet or dry conditions tomorrow he will be able to challenge for a fourth successive front row start for the Monster Yamaha Tech 3 Team, having been third fastest on a soaking wet track earlier.

Crutchlow enjoyed a satisfactory start to preparations for his all-important home round and he was just over 0.1s behind Dovizioso in eighth position. The 26-year-old though was unable to find a comfortable set-up that allowed him to show his true potential and he will work closely with his Monster Yamaha Tech 3 Team crew to find overnight improvements.

The British rider is still upbeat about his chances of mounting a front row challenge in tomorrow’s qualifying session after he was a promising fifth this morning in the wet conditions.

“This morning it was good to get some more time in the wet to work on the rain setting that we found in Le Mans. The bike worked well in France and it was positive again this morning to finish third. Although it was dry this afternoon the conditions were really tricky and not a lot of fun. It was so windy and that made it very difficult to control the bike. I am reasonably happy to be in sixth but we have some margin to improve and I am still close to the top three. That is the positive but we have to wait and see what will happen with the weather. It looks like more rain is coming but we are ready for anything and confident in the wet or dry of building on the podium achieved at the last race in Catalunya.”

“It hasn’t been the best start to my home race and we have definitely got to make some big improvements. This morning in the wet it didn’t feel too bad but I expected to be fast after fighting for the podium in the rain at Le Mans recently. But in the dry this afternoon I had a lot of problems and the bike was quite difficult to ride. Conditions were tricky because the wind was really strong and making it difficult but it is going to be a long night checking the data and analysing where we can improve. I am not fast enough but we know we have room for improvement. I will come out fighting tomorrow and hope to put on a good show for the British fans braving the weather.”