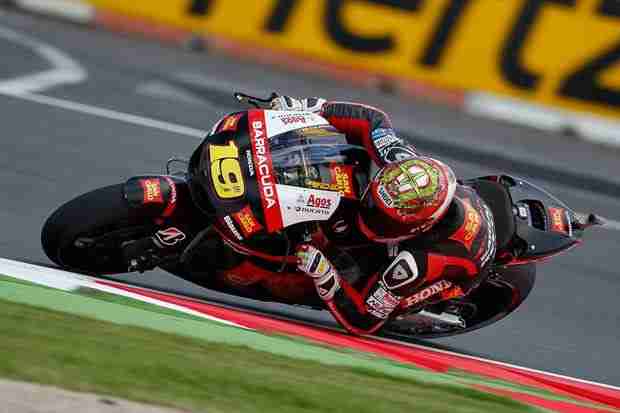 Team San Carlo Honda Gresini rider Alvaro Bautista followed up his pole position from yesterday with an excellent fourth place finish in the British Grand Prix at Silverstone today. After a positive race and test in Barcelona two weeks ago Alvaro’s confidence with the RC213V has continued to grow here in England and for the first time he was able to battle throughout a MotoGP race at the very front of the pack. It is a result that provides the team with a reward for all their hard work and the promise of even better results to come. It was a good weekend too for Michele Pirro, who took another step closer to the battle to be the top CRT and finished just four seconds behind the winning bike in the category.

“It has been a great weekend and it has confirmed the progress we have made since Catalunya. I am so happy to finish so close to the podium. Maybe I could have attacked for third at the end but it would have been risky and I just wanted to run with them to the end and not make mistakes. We have brought home some big points for the championship which was important for me and the team. Yesterday on pole and today just five seconds off the win — that is a very positive weekend and I hope we can continue from here. I’m pleased with the progress we have made, which is credit to the team engineers and to Showa. Our objective now is to take another step forward and run with the front guys on a more consistent basis.”

“I tried my best to the end but I am a little disappointed that I couldn’t get close enough to attack the two guys in front of me. Anyway I am happy because we have taken another step forward this weekend and now we can be fighting with them more often. Another step forward from here and then we will really be having fun.”

“It has been a great day and it was wonderful to see Alvaro fighting at the front throughout the race. It was the first time he has battled with these guys, he was careful not to make mistakes and he did a great job. I am really happy because we have confirmed the progress we made at Barcelona and Aragon in the tests and that is important. Running at the front of this pack will also give us great data. It has been a positive Sunday for Michele, running close to the best CRTs. He pushed hard and maybe we are just lacking a couple of little details to help him achieve our objective of finishing as the top CRT.”