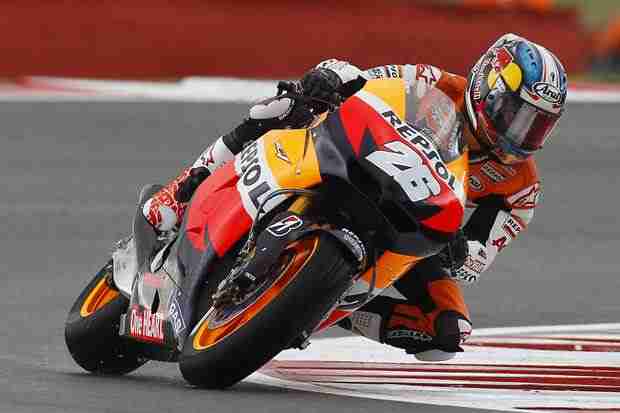 The tricky weather conditions typical of the British Grand Prix were once again present on Saturday, continuing the trend of this year’s event at Silverstone. After a dry morning practice run dominated by Casey Stoner, qualifying was brought to a close in the afternoon eight minutes from time by rain. Ãlvaro Bautista was ahead at the time and clinched pole position, sharing the front row with Ben Spies and Stoner. Dani Pedrosa will start from fifth place –the second row.

The third free practice session took place on a dry track, and Casey Stoner & Dani Pedrosa were amongst the top performers. Pedrosa improved upon his times and was third on his sixth lap, with a time not bettered on his six further times around Silverstone. He was 1.085s off teammate Stoner, who also rode twelve laps and led the way with a time of 2’03.941.

In qualifying, with rain a constant threat, Pedrosa went out with early intentions of taking pole. Ãlvaro Bautista, Ben Spies and Casey Stoner joined in the battle for pole. The trio had arranged themselves in that precise order with eighteen minutes to go, and that remained unchanged when rainfall came down with eight minutes remaining. The grid was thus decided, with Stoner on the far side of the front row and Pedrosa in the middle of the second.

“We’ve managed to improve our lap times quite a lot and our position on the grid a little, although by the end of the practice some drops of rain prevented us to make any time attack with the last set of tyres he had ready. I’m satisfied because we’ve improved the setup of the bike this afternoon and I think we can still do another step forward in the warm-up tomorrow. We had a better pace in qualifying, but my feeling didn’t change much compared to yesterday.

We did many laps with the new front tyre, but only short runs, so the performance in the second half of the race is mystery. I keep thinking that the new front tyre is not safer; we’ve seen many crashed in the front. We have to have a good start tomorrow, but also be able to keep a good pace during the 20 laps. I don’t have a lot of experience in this track; I missed the race last year and in 2010 we chose the wrong tyre and we did a bad race, but we will do the maximum tomorrow to get a good result”.

“This afternoon was a little disappointing to be honest. We began the session and struggled with the bike, we couldn’t really get any edge grip and seemed to make the chatter worse. We were trying to fix some problems we had in the morning but ended up making them worse so we tried various things to improve them.

Finally we found something that was working so we decided to scrap the lap and come in and put a new soft rear tyre on but it didn’t work for us as we got out there and the rain started to come, just enough to upset the bike a little. I was waiting for the rain to disappear so I could put a lap in, but unfortunately we didn’t get an opportunity and missed our chance at pole. For tomorrow I hope the race is one way or another, not a 50/50 race, but we’ll deal with whatever we have and I feel confident with both situations”.