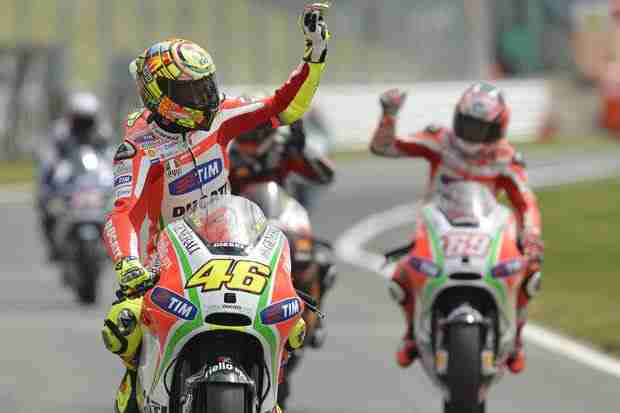 The British Grand Prix at Silverstone presented a big challenge for the Ducati Team, but it also provided some positive signs for the technicians regarding the progress made and the work still to be done. After starting from the third row, Nicky Hayden spent the first part of the race with the four-rider group that was fighting over the podium positions, and although he steadily lost ground in the second half before finishing seventh, his gap to the front was the team’s smallest in the dry so far this season.

Valentino Rossi experienced more difficulty than his teammate, and he wasn’t able to find the same feeling that he had in the morning warm-up session, in which he had made progress. On Saturday, both riders will star in World Ducati Week, which will take place at Misano from 21-24 June, and where they’ll count on the support and affection of tens of thousands of Ducatisti from all over the world.

“We did the sighting lap with the hard rear tyre, but with the sprinkles and dark clouds, we decided to play it safe and switch to the soft on the grid. Everybody else had it too, but we know our bike has been hard on tyres here. I got an awesome start, and the beginning of the race was great. I took some chances to hang in as long as I could, and I enjoyed it and learned some things. Then the grip went, which brought on a lot of chatter. I couldn’t accelerate or carry speed on the straightaway, and we started having a little problem with the electronics in one corner, which cost us some time. Crutchlow got me on the last lap, which is frustrating, but I had my smallest gaps to the front this year in terms of race time and best lap. We need to figure out how to make me and the bike less hard on the rear tyre, but there were some positives.”

“It was a difficult weekend apart from the wet first session, in which we were very strong, as we had trouble in every dry session except for this morning’s warm-up. From the start of the race, I wasn’t able to maintain the pace of the others. I tried to stay with them, but I struggled a lot with mid-corner chatter, and a couple of times I came close to losing control of the bike. After some laps, the rear tyre started to slide a lot, and at the same time an exhaust broke. To be honest, that didn’t affect us so much, though it did rob some power on the straightaway. We scored a few points, but Silverstone is still the most difficult track for me. I think that the ‘true’ Ducati today was that of Nicky, who had a smaller gap to the front at the finish, more or less the level we reached in Barcelona. Now we must try to understand why I was only able to ride a bit better this morning, in the warm-up, but above all we must try to be more competitive in the next race, at Assen, which is a track that I like and where we want to return to the level we had at Estoril, Le Mans, and Barcelona.”

“I think that there were some positive aspects to today’s race. Nicky rode at the top riders’ pace for a while and he posted the third-best lap time overall, 34 thousandths off of Lorenzo’s best. He lost ground to the others in the latter stages, similar to what happened to Valentino in Barcelona two weeks ago, so by studying the information we collected with both of them, we’ll try to understand how to improve our performance over race distance. Valentino had more trouble, but nonetheless, he was very fast in the wet, which wasn’t the case last year in the same conditions. Of course this isn’t enough, and we must manage to give both of our riders the conditions they need to be consistently effective in normal conditions. We’ll continue to work toward that goal, step by step.”