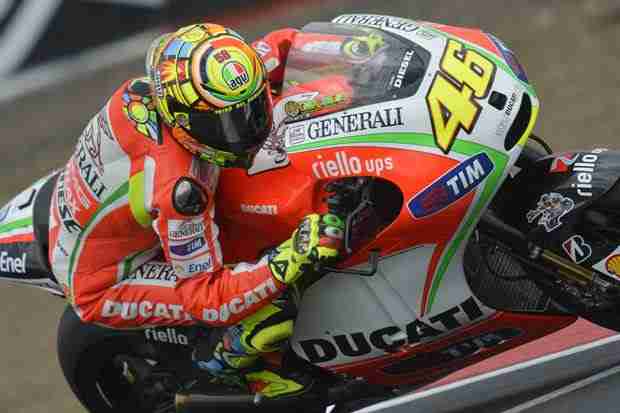 Qualifying practice for the British Grand Prix at Silverstone was marked by cold temperatures, strong gusts of wind and, in the final minutes, a rain shower. The challenging session saw Nicky Hayden and Valentino Rossi finish in seventh and tenth places, respectively, after both riders fell in separate incidents at a spot that is made particularly treacherous by a slight depression in the track. Valentino Rossi had just started his session when he fell, whereas Hayden was in the process of completing a lap that had him on pace for the provisional pole. The rain that began falling ten minutes from the end prevented both riders from improving their times late in the session.

“Qualifying was going pretty well for a while, as I was closer to the front and the bike felt good. I put in a new soft tyre and went out for my first real qualifying run, and most of the lap felt really good. Then coming over that crest in the last section, I lost the front without much warning. I don’t really have an excuse. I was in there hot, but it felt good when I first got on the brakes. Crashing is part of motorcycle racing, but I just wish I could have finished that lap. It’s a bit strange that Valentino and I did the exact same crash, but maybe we can understand something from the data. Considering that I crashed out so early, seventh on the grid isn’t too bad, but I definitely feel we were capable of more today.”

“Today was pretty difficult. Shortly after qualifying started, I crashed when approaching the last chicane, a tricky part of the track where you brake hard and where there’s a small crest and a depression. The bike unweights there and you can lose the front. We struggle there because we don’t have much grip on the front, so tomorrow we’ll have to be particularly careful. Also, although I rode better today, I still don’t understand this track as I should, and in some parts I’m not as effective as I would like to be. Anyway, I did my best time with the hard tyre. I had two softs to use at the end, but of course it started raining right when it was time to put them on. We’ll see what conditions we’ll have tomorrow, and if it’s dry for the warm-up, we’ll try something to help us go a bit better.”