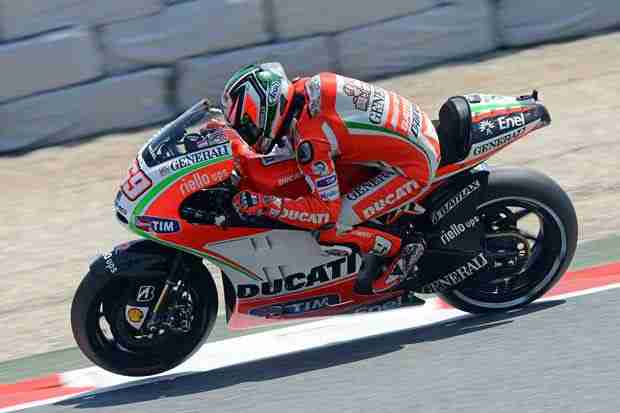 Following a week that included two days of hard work during the tests at Barcelona and Aragon, the Ducati Team is ready to return to action for the sixth stop of the MotoGP series..

Sunday’s British Grand Prix at Silverstone is one of the most interesting and challenging on the calendar. Last year was Valentino Rossi’s first time competing at the circuit, and despite not having found the ideal setup, he managed a sixth-place finish. As he approaches the tricky British track, the Italian hopes to start off with the good feeling he found in Spain. Nicky Hayden, who notched solid fourth-place finishes in each of his previous two visits to the venue, and who last year set the fastest lap of the race, hopes to make up for the misfortune he recently experienced at the last two rounds.

“I have a one-season ‘disadvantage’ at Silverstone compared to the other riders, who started a year ahead of me, so I’ll have to ride as much as possible during the practice sessions in order to understand the track well, as last year was quite difficult. During the Aragon test last week, we found some small things with the electronics and worked a bit on the settings. Now we’ll see how it works in England. We hope I’ll be able to ride well, that we’ll find a good setup and that we can stay at the same level in the dry as we were at the Barcelona GP, although our chances will be better if it rains.”

“It’s exciting to go to Silverstone. We’ve been there two years now, but each time it’s been a little different, with changes to the pavement or the pit complex, so it’s a little like going to a new track. With the lap being so long, you’ve really got to take advantage of any dry time you get to find a good setup, as the sessions go by really quickly. There are so many different corners, and it’s really important to dial in the electronics for all the sections. I’d say we lean on the electronics more there than at some other tracks. It’s fast and open, with high-speed corners, and I really like it. The last couple of races haven’t been great, but we just have to hang in there and try to take a step. It won’t be easy, but I’m looking forward to the weekend.”

“Last year the Silverstone weekend was very challenging, even if we had a decent team result in the end, with Nicky fourth and Vale sixth. We’re coming off a Grand Prix that was followed by two days of testing, during which we made a little progress. Our goal is to continue to improve, trying to adapt the settings that we found for the GP12 to this fast, difficult track.”