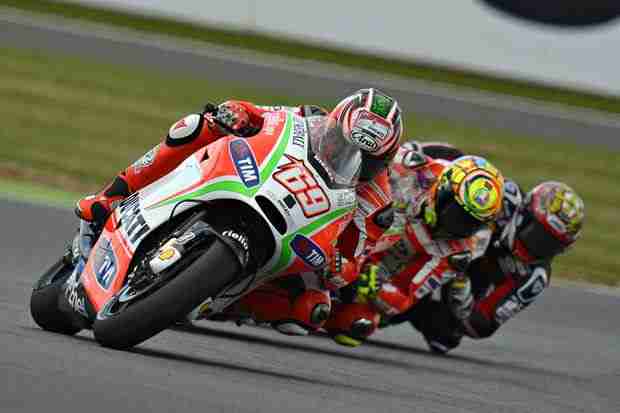 The first free practice session of the British Grand Prix, which this morning saw Valentino Rossi and Nicky Hayden finish first and second, respectively, once again confirmed that both Ducati Team riders have an excellent wet setup for the GP12.

In the second session, the MotoGP riders turned approximately three laps before a brief afternoon rain shower sent them all back to the garages for some minutes, reducing the time they had to work on a dry setup. Hayden ended with a respectable time that put him fourth best, while Rossi, who is hoping for at least one more dry session to better understand the challenging British circuit, was eleventh.

“We know our bike really likes wet conditions, and the team was obviously quite good this morning. With the rain shower this afternoon, we didn’t really get to do a lot of dry laps, as the time went by pretty quickly. The track was actually pretty good as far as grip was concerned, although it was really windy out there. We learned a couple of things, but we still have more work to do. We need to improve the transmission ratios a bit in some spots and work to get some more stability, because the side winds made it very difficult in the high-speed parts.”

“This morning went really well. We were fastest, which made us very happy since we had many problems here last year in the wet. So now we’re competitive in the wet on this track as well, whereas it was a little harder for us in the dry. That said, I would like to have at least one more dry session because on the one hand there are a couple of things to sort on the bike, which gives us some margin, while on the other hand I’m still not riding this track well. There are two or three spots where my lines aren’t efficient, and where I’m still losing some time. It’s better than last year, but still not good enough, so I need a little time. We’ll see what the weather is like tomorrow. Here, it’s the dry conditions that are the unknown, because it always rains!”