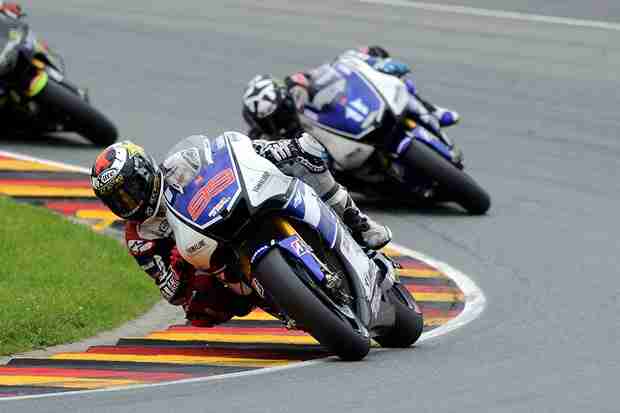 Yamaha Factory Racing rider Jorge Lorenzo moves further back into the Championship lead today after taking second in the Grand Prix of Germany at the Sachsenring circuit. Having been suggested the harder tyre option by Bridgestone for safety reasons Lorenzo struggled to match the pace of rivals Dani Pedrosa and Casey Stoner. He spent the majority of the race holding third whilst maintaining a gap to Andrea Dovizioso behind in fourth. A crash by Stoner in the final lap promoted him to second, putting him on 160 Championship points, 14 clear of Pedrosa in second.

Team mate Ben Spies made a good start from second on the grid, settling in to third on the first corner behind the leaders Pedrosa and Stoner. It was also suggested that he use the harder option tyre which combined with his set up made it difficult to find optimum edge grip and acceleration. Spies was passed by Dovizioso and Cal Crutchlow but then caught them again and was just 0.071 seconds from third when he crossed the line. The Texan takes a further 13 Championship points and remains in tenth position.

“Well, things can change completely in one race. In Holland we had a 25 point advantage then suddenly zero, one engine less and we were very disappointed. Then today we had some luck from Casey’s unfortunate crash. I would have been happy to have finished in third position because today the bike and the rear tyre was not so good. The race was very tough; I always seem to finish second here! I would have preferred not to crash in Assen and for Casey not to crash here but that is racing sometimes. We struggled a little all weekend with the changing weather so we must be happy with the end result.”

“It was a frustrating race, but I guess we have to be happy with a top five. We had a lot more potential but we did the best we could with the set up we had. We didn’t have enough edge grip and acceleration so I had to sit behind Dovi and Cal and wait. I could see Cal was getting a little impatient and wanting to pass Dovi so I was hoping he would and maybe clear a spot for me to get by. I had a good pace but not enough to out brake them so had to play a waiting game.”

“Today was a great result after a very difficult race. Our pace was never really there and we were not really happy with our set up in any session. What counts is the standings so we are happy to be back in the lead and heading to Mugello next weekend.”

“It has been a pretty tough weekend but we have to see it in a different way. We came here second in the Championship and we are leaving leading it. This is the important thing. We knew from the beginning that it was going to be a complicated race and the weather didn’t help us. This morning we were pretty satisfied with the set up then suddenly we had to run with the hardest tyre. Unfortunately this choice compromised our results.”