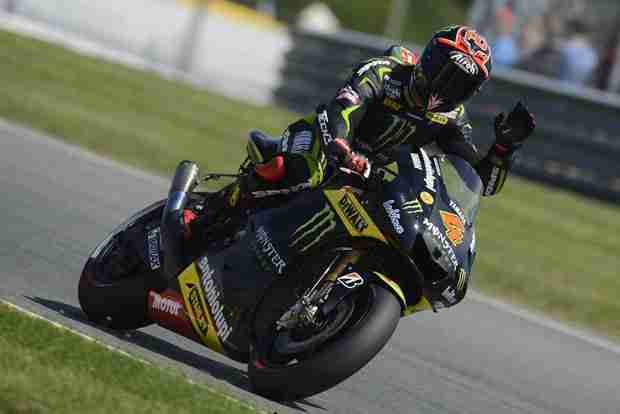 Monster Yamaha Tech 3 Team rider Cal Crutchlow showed outstanding wet weather riding skills this afternoon to mount a brilliant challenge for pole position at a rain-soaked Sachsenring track in Germany. The tight and twisty Sachsenring was hit by monsoon conditions throughout today’s qualifying session but Crutchlow excelled on his YZR-M1 machine to battle for a fourth front row start in the 2012 MotoGP World Championship. Crutchlow skilfully calculated where he could push hard in t reacherous conditions and the British rider delivered a faultless performance to finish in fourth position. The former World Supersport Champion’s best lap of 1.33.288 momentarily put him on top of the timesheets in a pulsating finale and a front row start to add to those achieved in Qatar, Estoril and Catalunya seemed on the cards.

A late attack by Casey Stoner, Ben Spies and Dani Pedrosa though put Crutchlow on the second row but once again he was the leading non-factory rider and the 26-year-old carries high hopes of securing a maiden podium in tomorrow’s 30-lap race. Italian Andrea Dovizioso is a past master of adverse weather conditions and he demonstrated his wet weather potential by lapping inside the top three in the opening half of the session. But he was unable to improve on his best pace of 1.33.205 and he will start from eighth position on the grid.

A third row start is not ideal on a layout as tight and twisty as Sachsenring but Dovizioso is confident he has the speed to put himself in contention for a third rostrum finish in four races.

“That was a really tough session because the rain was coming down really hard at times and it was easy to get caught out and make a mistake. Considering how bad the conditions were I am really happy to be so close to the front row. I was very close to being on the front row again but to head the second row is a good result and I am looking forward to the race. I’ve shown good pace in the wet and dry all weekend but the problem is we haven’t had enough track time in each t o get a good set-up with the bike. We improved in the rain today and my Monster Yamaha Tech 3 crew put another great bike underneath me. If the rain is the same tomorrow it will be a very tricky race and a real test of concentration. It won’t be any easier in the dry either considering the lack of dry track time. I’ll be giving it my best as always and hopefully I’ll be battling inside the top five again.”

“I am little bit upset to be starting from the third row because this track is very tight and it is very hard to overtake on. Obviously it is better to be starting much closer to the front and I didn’t manage it, so I will need to be quite aggressive from the start tomorrow to make sure I don’t lose too much ground to the leading group. I can’t be too disappointed though and we improved the ra in set-up of the bike a lot today and I think my potential for the race is a lot higher than eighth. If the rain is as bad in the race as this afternoon then it will be a very tough race. The track was very slippery but I had a good feeling with the YZR-M1 and I’m sure we have prepared the best we can for a wet or a dry race.”