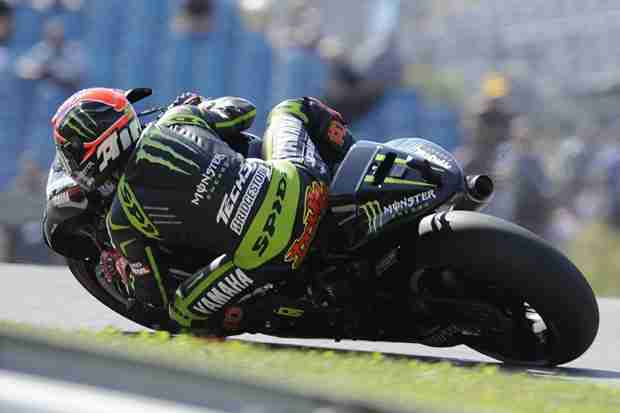 Monster Yamaha Tech 3 Team riders Andrea Dovizioso and Cal Crutchlow conquered contrasting weather conditions at Germany’s Sachsenring track today to make a positive start to round eight of the 2012 MotoGP World Championship. This morning’s opening practice session took place in warm and sunny conditions and Dovizioso and Crutchlow were immediately able to set a competitive pace to finish in fourth and fifth respectively.

Italian Dovizioso, who is in a rich vein of form with two podium finishes in the previous three races, was only 0.275s away from the top three after quickly finding a fast rhythm on the tight and twisty Sachsenring track. British rider Crutchlow also enjoyed a productive start to the eni Motorrad Grand Prix Deutschland weekend and he was only 0.159s behind Dovizioso’s pace in fifth position.

Both were hoping to work on improving the set-up of their YZR-M1 machines this afternoon but heavy rainfall saturated the Sachsenring track just minutes before the second practice session got underway. With a strong wind gusting around the circuit too, conditions were far from ideal but Crutchlow and Dovizioso demonstrated their high potential on Bridgestone’s rain tyres. Crutchlow, who has been in outstanding form in 2012 with f ive top five finishes, set the seventh fastest time and his lap of 1.32.744 was only 0.516s behind Dani Pedrosa.

Dovizioso was only one position further back and just 0.073s behind Crutchlow and the Monster Yamaha Tech 3 Team riders are optimistic that they will have the pace to fight for the podium in wet or dry conditions in Sunday’s 30-lap encounter.

“I am really satisfied with today because I am not so far away in both dry and wet conditions and the lap times are very close in both sessions. Immediately this morning in the dry I had a very good feeling with the YZR-M1 and we concentrated mainly on the race set-up. In the past here I have been very fast in practice but then had a lot of problems in the race, so we have worked a lot on conserving tyre life. This track is very short and you spend a lot of time carrying a lot of lean angle, so it is easy to wear the tyre too quickly. I have been working on carrying a little less lean angle to help save the tyres for the end of the race. I am happy with my pace in the wet also because at the start of the session when the track was at its wettest, I followed Pedrosa and I could comfortably stay with him and he was the fastest in all conditions today. It has been a good start but we need to see what will happen with the weather.”

“It was a decent start to the weekend and I am not too far away from the best pace in both dry and wet conditions. But I need to make some improvements in the first sector because that is where I am losing a lot of time. It is mainly in the first two corners where I’m struggling and we don’t fully understand why, so tonight I’ll sit down with my crew and analyse the data so we can work on being faster in that part of the track tomorrow. But I am still very happy today because last year this was one of my worst races. I was only 14th and a lot slower than the best pace, but I was close to the front in both sessions and that’s a positive way to kick off the weekend.”