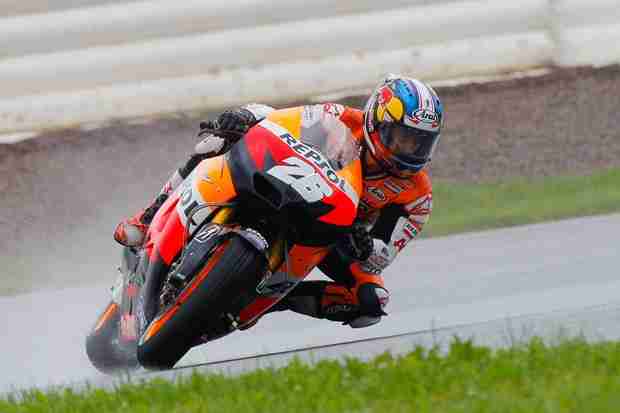 It was a weekend of highs and lows for the Repsol Honda Team at the German Grand Prix, as Dani Pedrosa’s first win of the season contrasted with a last lap crash for teammate Casey Stoner. Both riders were challenging for the lead right from the off, leading up to a final lap in which Pedrosa set the fastest time of the race and Stoner crashed out on the penultimate corner.

Sachsenring is a favoured circuit for Pedrosa, who took his sixth win at the track today –his third consecutive victory in Germany in MotoGP. Reigning World Champion Casey Stoner started from pole, with Pedrosa joining him on the front row in third. Both got a good start and it was the Spaniard who grabbed the holeshot, followed by Stoner passing on the inside at a series of left handers.

The duo, as expected, set a pace that was impossible for the rest of the field to follow, opening up a gap. Stoner tried to pull away from Pedrosa, but the Spaniard stayed with him and launched an attack on lap 19 of 30. Pedrosa overtook at the end of the straight, gaining some breathing space when Stoner’s RC213V shook soon after. Stoner did not give up and regained the lost ground, sitting behind his teammate and preparing a definitive move. Based on the pace of the final ten laps, both knew that it would go down to the wire. Two laps from the end, Pedrosa put in a race fastest time to pressure Stoner. On the final time around, with just two corners to go, Stoner fell and Pedrosa took the chequered flag –setting another fastest lap in the process.

The MotoGP World Championship moves on to Mugello for another race in seven days time, with Pedrosa and Stoner in second and third in the overall standings and 14 and 20 points, respectively, behind Jorge Lorenzo.

“I’m really very happy with this win. We finally made it happen and it’s great not only for me, but also for my team that never gave up, for my family and fans that have been pushing and supporting me all this time when we were taking second and third places, but missing out on the victory. The podiums we had this season were very important, but I really wanted to give a victory to my team and it arrived today at a circuit that I always enjoy. It’s been a really hard day though.

Casey had a superb race also and put a lot of pressure on me at the end, but I knew that I had the pace and that we both would need to fight for the victory until the last turn. I tried to brake hard, close all the doors and to take the win. Finally it is a great feeling and sure will give us a lot of motivation for the next races. It’s also good for the Championship, but we will not relax; victory this season has not been easy for any of us, so we have to keep pushing as we do.”

“I’m pretty disappointed, I had planned to go for my ‘win or bin’ effort in the last corner not that one! I was happy on the bike and felt we had a few tenths a lap over Dani and confident I could pull him back in. On the final lap I made a mistake going into the first turn and I had to push a little more than I wanted through some of the sections but I got on to Dani exactly where I wanted and planned to make my overtake in the last corner, if I didn’t have an opportunity earlier in the lap.

I felt confident but as soon as I tried to turn in a little more, the front went. I was already off the brakes and not in the hard braking area, as soon as I eased of the brakes I guess the weight came off the front and down I went. I’m frustrated I wasn’t allowed to get up and try and score some points, the bike was perfect, but the marshals pushed me away. It’s our first crash in a race, down to our own mistake, for the first time in a long time so I’m disappointed for sure, but we knew we had the pace. If we can continue this momentum for the rest of the season then we shouldn’t be so worried for the Championship.”