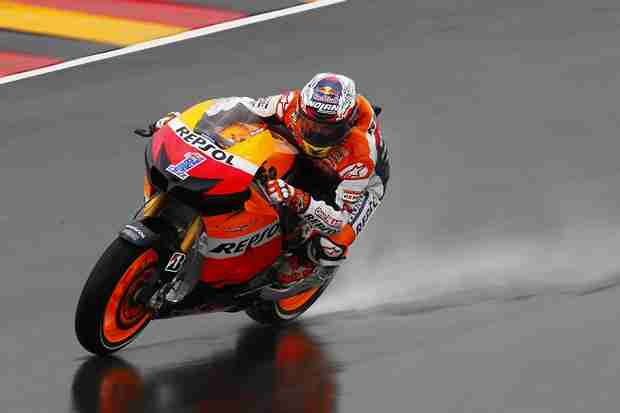 Weather forecasters had predicted a day of sun and fine temperatures today at Sachsenring, but the rain that has followed the 2012 season on its travels would not stay away for long. The dampening and subsequent drying of the German circuit meant that grid positions would be decided at the very last moment this afternoon. In the morning session, Repsol riders Casey Stoner and Dani Pedrosa took things easy in light of the wet conditions, with the Australian staying in the garage and his teammate undertaking just eight laps. In the afternoon qualifying run, the Repsol Honda Team engaged in battle for pole position, with Stoner getting the nod for his second consecutive qualifying top spot. Pedrosa joins him on the front row in third place for the Sunday race.

Stoner decided not to ride in the tricky third session, as the wet track and intermittent rain offered little in the way of opportunities for useful data collection. Pedrosa rode eight laps but also opted against pushing hard, finishing the session over five seconds behind Michele Pirro. Rainfall intensified in qualifying, leaving the track completely wet. Stoner and Pedrosa took the initiative, although at the halfway point an increase in the already heavy downpour left home rider Stefan Bradl on provisional pole. Stoner would have been second and Pedrosa sixth, but things changed after a brief stay in the pits.

Eight minutes from the end of the session, all MotoGP riders were back on track and trying to make the most of the fact that rain had stopped at Sachsenring. Up to seven riders took a turn at the head of the timesheet, including both Repsol Honda Team competitors, Jorge Lorenzo, Ben Spies, Bradl, Nicky Hayden and Cal Crutchlow. It was Stoner who finally took pole, with Pedrosa third by little over two-tenths of a second. The pole position is Stoner’s fourth of the season, after races at Estoril, MontmelÃ³ and Assen. It is also his second in a row.

“I’m very happy with this qualifying session. It was difficult, especially at the beginning as it was raining very hard and we had so much water on the asphalt, it was difficult to stop the bike spinning and aquaplaning. It was crucial to be ready at the end when the rain stopped because everybody was improving their lap times and in one lap you could be first or sixth.

I’m very happy because in the past in these kind of sessions we didn’t get a good result. But this time, I was more confident every lap and we made it; I thought I got the pole in my last flying lap, but anyway to be at the front is key in Sachsenring. Yesterday we also had a good feeling in the dry, and it looks like we will have a dry race tomorrow, so it will be important to make the right choice on tyres and try the hard compound in the warm up to compare with the soft we tried on Friday.”

“It was actually a very difficult session. We started off well and then we switched to our number one bike with a completely different set up and that felt a lot better. On the first lap, I matched my best time I did on my second bike, then unfortunately on the second lap the engine gave up. We’re not too sure what happened, if it was something electrical or if some water got in there, but we’ll find out later.

This put us on the back foot a little because as soon as we came back and got the tyres ready on the second bike, it started to rain hard again so we knew we wouldn’t be able to get a better lap time in those conditions. We decided to wait for later in the session as we knew we wouldn’t have much hope unless the conditions improved a little, and luckily they did. It ended up being a really good day for us and we’ll see what we’re capable of tomorrow.”