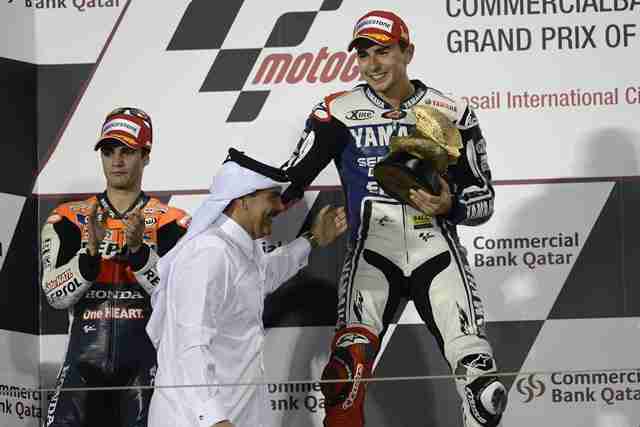 Yamaha Factory Racing rider Jorge Lorenzo claimed a sensational victory this evening under the dramatic floodlights of the Losail circuit, finally claiming his first premier class Grad Prix of Qatar win. Lorenzo took the lead from the start and held off rival Casey Stoner for the first few laps before conceding the lead and tucking into second. The Mallorcan then played the waiting game, never letting Stoner more than two seconds ahead. With seven laps to go he started to close the distance as Stoner’s pace dropped off, holding off a determined Dani Pedrosa on his tail to take the lead. Lorenzo crossed the line 0.852 seconds ahead of Pedrosa, taking the lead in the 2012 Championship standings with 25 points. Ben Spies first race of the season proved to be a tough one for the Texan, battling major chatter issues from the start of the race. Although unable to hold a competitive pace Spies kept his cool and hung on to take 11th at the line and five Championship points in the process. The MotoGP paddock now moves to Jerez in three weeks time for round two on the 29th April.

“What an amazing race! I put everything I have, all my energy into the track, this victory is because I never gave up, kept pushing and trying. Casey was very strong at the beginning and opened a gap. Fortunately for us he struggled at the end and dropped his pace where I could keep mine so I managed to pass him. I am very grateful to Yamaha because they have made a big step this winter on the YZR-M1.”

“A tough race but sometimes that’s just the way it goes. I tested my airbag twice this weekend; good to know it works well! We’ll go back to Jerez now and hopefully have the bike issue sorted. It was good that Jorge won, we can see the Yamaha is going well, we just had a big problem with chatter so we have to work out what it was.”